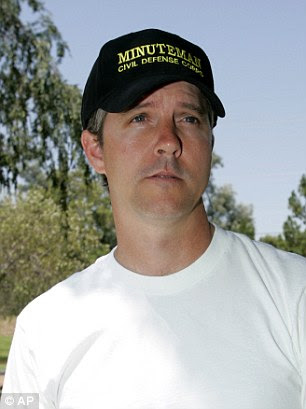 An Arizona jury convicted the founder of the Minuteman border-watch group of molesting a five-year-old girl. Christopher Allen Simcox, 55, was found guilty on charges that he molested the girl and showed her pornography on Wednesday. But he escaped a mandatory life sentence after the jury acquitted him on of engaging in sexual conduct with a six-year-old girl. A molestation conviction carries a sentence of 10 to 24 years in prison.Simcox, who was convicted on two molestation counts, is scheduled to be sentenced on July 5. An attorney who assisted him at trial said Simcox will still likely spend the rest of his life in prison, given Arizona's tough sentencing guidelines. In closing arguments, a prosecutor scoffed at Simcox's claim that the girls were pressured by adults to bring the allegations. Daily Mail Read More>>>>>>