The suicide bomber who blew himself up at a pop concert killing 22 people including young children has been named as Salman Abedi. ISIS have claimed responsibility after the terrorist set off a ball bearing bomb at an Ariana Grande concert, killing 22 and injuring 119 in the worst terror attack Britain has seen since the 7/7 London bombings. Eight-year-old Saffie Roussos, 18-year-old Georgina Callander and 26-year-old John Atkinson were among those killed. Of the injured, at least 12 were children were among 59 taken to hospital, with 60 others treated at the scene. Traumatised witnesses have told how of nuts and bolts tore into young music fans when the bomb was detonated in the foyer area of the Manchester Arena moments after a concert by the US popstar ended. The bomber - named today as 22-year-old Salman Abedi - was known to authorities. He died at the scene and police carried out a controlled explosion at what is believed to be his home during raids around the city today. Abedi is understood to have been born in Britain but is from a Libyan family. A school friend told MailOnline had grown a beard when he last saw him and neighbours claimed he had been 'acting strangely' recently. A 23-year-old man, believed to be Abedi's brother, was also arrested by anti-terror officers as police and security services attempt to work out if the suicide bomber was part of a cell. Security sources have told MailOnline that initial analysis of the 'sophisticated' device suggests it was made by an expert. Daily Mail>>>>>>>> 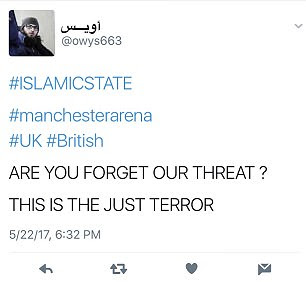 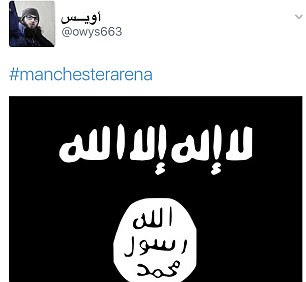