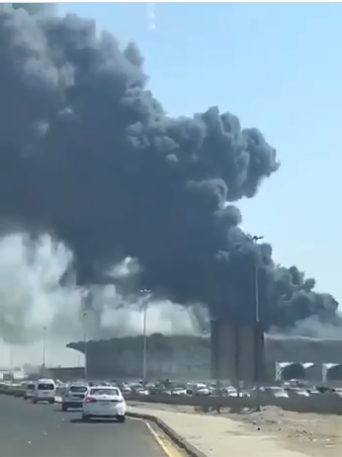 Following up the August 11th DOOM post on the Haramain:


HAJJ DOOM? Haramain, The High Speed Rail From Mecca To Medina TO CRASH?August 11, 2019

Took over a month...not a train crash. Looks like a fire. Five dead.

DUBAI (Reuters) - A fire broke out in the Haramain high-speed rail station in Saudi Arabia’s coastal city of Jeddah, injuring at least five people, the authorities said on Sunday. Plumes of black smoke were still rising from the roof of the station at least four hours after the fire broke out at 12.35 p.m. (0935 GMT), Al-Ekhbariya state television footage showed.It said civil defense were fighting the fire with air support and many sections of the blaze were under control. Five people were transported to hospital with injuries, the official Twitter account of Mecca region reported. It said 16 medical teams were working at the scene.Al-Ekhbariya said four people were treated on site and traffic on the railway line had been suspended until further notice for safety reasons. The 450-km (280-mile) Haramain Railway linking the two holiest cities in Islam, Mecca and Medina, with the Red Sea city of Jeddah, was opened in 2018 and cost 6.7 billion euros ($7.3 billion). The station is part of efforts to boost tourism revenue as the country seeks to shed its dependence on oil exports.. Source