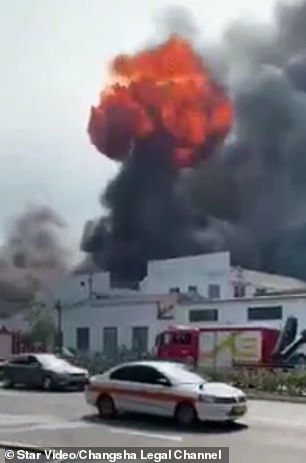 Well since the SUMMER TIME EXPLOSIONS went off well...

Giant fireball erupts into the sky as huge blaze rips through a factory in China, killing 19 people

A huge factory fire has killed 19 people in eastern China, according to authorities. The blaze broke out on Sunday at a plant in Ninghai county in Zhejiang province, said the local government. Footage released by Chinese media shows a giant fireball followed by a mushroom cloud erupting into the sky during the fatal incident.The incident, which is under investigation, occurred at a facility owned by the Ruiqi Daily Necessities Company, the Ninghai government reported today on its official Twitter-like Weibo account. The fire started at about 1:20pm and was put out at around 4pm, the government reported. Among eight people rescued from the fire, three were injured and sent to hospital for medical treatment, said Ninghai authorities. Video clips released by Star Video, which is affiliated to the Changsha Legal Channel, shows the impact of the incident. Plumes of thick smoke were captured billowing into the sky. Local residents were seen gathering on a road outside the factory packed by fire engines. Ninghai has a population of around 680,000 people and is a county administered by the city of Ningbo. Source