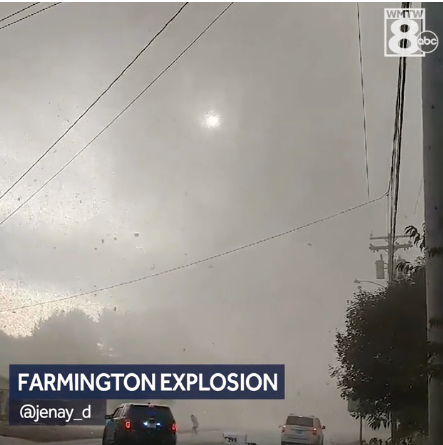 OK I guess the summer time explosions are still in force..

Of course its gas...


1 Maine firefighter killed, many others injured in explosion, officials say

FARMINGTON, Maine — A firefighter has been killed in an explosion at a building on Route 2 in Farmington, Maine, on Monday morning, a member of the board of selectmen said.  H. Scott Landry told our sister station WMTW News 8 that an unnamed firefighter was killed and several others were injured in the explosion.Landry said firefighters responded to 313 Farmington Falls Road, which is also Route 2, after people in the building reported smelling gas.Firefighters responded, went into the building and it exploded, Landry said.  Franklin County Sheriff Scott Nichols said many firefighters were injured in the explosion.  The building is the central office for LEAP Inc., which provides support for people with developmental, cognitive and intellectual disabilities.  Pictures from the scene showed a building in ruins.  Witnesses reported seeing rubble everywhere and smoke in the sky.  People across Oxford and Franklin counties said they felt the explosion.Route 2 is closed in the area of the explosion. Traffic is being detoured to Route 156. Source