Pickup Truck Driving Nicolas Elliott, 30, Shot A Man For Just Looking At Him At The Stop Light... 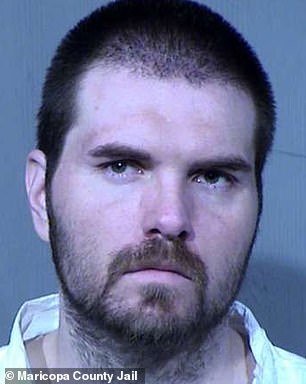 Truck driver, 30, 'fatally shoots 26-year-old motorist in the chest for looking at him while stopped at a red light'

Police in Phoenix say a man shot and killed another driver because he looked at him while both of them stopped at a red light. Nicolas Elliott, 30, was arrested on Thursday for the fatal shooting of Alex Mixon, 26, earlier this year, according to authorities in Phoenix. The Phoenix Police Department said that Elliott shot and killed Mixon on March 1 at around 3:15am ‘for merely looking at him while stopped at a red traffic light.’ Police say Mixon was driving westbound on Thunderbird Road near 30th Street in a Dodge pickup truck at the time of the shooting. After Mixon was shot, the truck crossed into eastbound lanes and veered off the roadway. The vehicle then hit an electricity pole and went through a wall before it came to a complete stop, according to the Arizona Republic. Mixon was rushed to a local hospital, where he was pronounced dead, authorities said. Initially, police believed that Mixon’s death was a single-vehicle accident. But an autopsy performed the next day confirmed that he had been shot in the chest. Police then began to investigate his death as a homicide. According to court documents, Elliott fled the scene moments after the shooting. Source