Twitter today says it will begin to enforce new rules related to how it handles hateful conduct and abusive behavior taking place on its platform. The changes are a part of the company’s broader agenda to craft new policies focused on reducing the amount of abuse, hate speech, violence and harassment. Specifically, Twitter explains that in addition to threatening violence or physical harm, it will also look for accounts affiliated with groups that promote violence against citizens to further their causes. This includes any group that promotes violence either on or off Twitter’s platform, but doesn’t apply to military or government entities. Twitter also says it will consider exceptions for groups that are engaged in peaceful resolution. Source

Under fire for Facebook Inc.’s role as a platform for political propaganda, co-founder Mark Zuckerberg has punched back, saying his mission is above partisanship. “We hope to give all people a voice and create a platform for all ideas,” Zuckerberg wrote in September after President Donald Trump accused Facebook of bias.Zuckerberg’s social network is a politically agnostic tool for its more than 2 billion users, he has said. But Facebook, it turns out, is no bystander in global politics. What he hasn’t said is that his company actively works with political parties and leaders including those who use the platform to stifle opposition—sometimes with the aid of “troll armies” that spread misinformation and extremist ideologies. Source

So did Twitter and Facebook crackdown on free speech stop a MUSLIM from ramming his SUV into a crowd of White Westerners?

But the clueless morons at Twitter and Facebook will continue their crackdown on free speech campaign so that Muslims can continue their murderous assault on White Westerners. 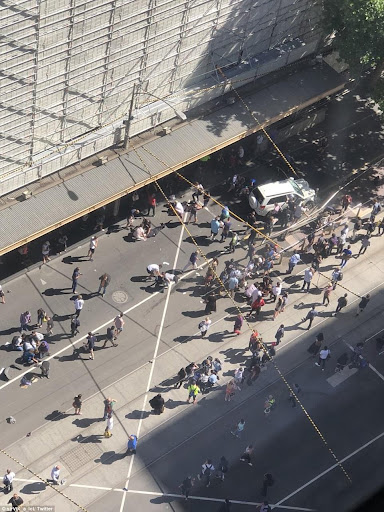 More than a dozen pedestrians, including a toddler, have been injured with four fighting for life in hospital after a car 'deliberately' ploughed into rush hour crowds in the heart of Melbourne. A white Suzuki SUV with p-plates, driven by 32-year-old man of Afghan descent, who The Herald Sun have identified as Saeed Noori, crashed into a large group of commuters and shoppers at the corner of Melbourne's busy Elizabeth Street and Flinders Street at 4.41pm on Thursday. The 32-year-old lone wolf driver was known to police and was arrested at the scene. Source