Shurooq is the time of sunrise, the time when the upper limb of the sun just starts to appear above the horizon. This marks the end time for Fajr (morning) prayer

Saudi Muslim MOHAMMED SAEED ALSHAMRANI was praying the Muslim Morning Prayers Fajr (Morning) in a Classroom in building 633 at 6:31 AM and when he was confronted he opened fire at 6:45 AM

The shooting broke out on December 6, 2019, at 6:45 a.m., according to the sheriff. Two deputies were shot, one in the arm and one in the leg, but they are expected to survive, officials told the media.  “It covered two floors from that one building. It is a bit like a movie because you have spent shell casings all over,” said a sheriff’s commander during a press conference. AP reported the building was Building 633. Source

WASHINGTON (AP) — The Florida Naval station shooting suspect was an aviation officer in the Saudi Air Force, U.S. officials said Friday, as the FBI and other authorities began investigating the incident to determine if it was terrorism-related. The officials, who spoke on condition of anonymity to discuss an ongoing investigation, said the suspect was a second lieutenant attending the aviation school at the base. Military from around the globe attend the Naval Air Station in Pensacola for flight training. The shooter opened fire in a classroom building on Friday morning. The attack left four people dead, including the assailant, and multiple people wounded. There was no immediate report on the shooting carried by Saudi state media. The kingdom has long relied on the U.S. to train its military. The shooting was the second at a U.S. Navy base this week. Source 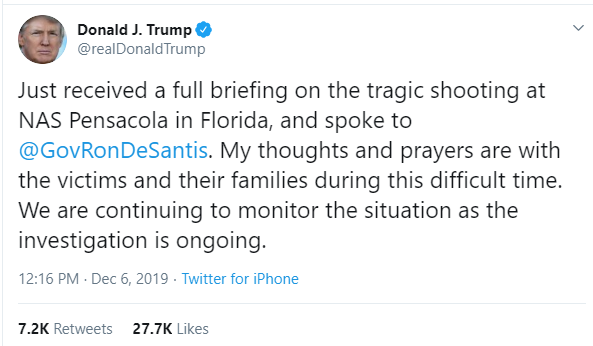