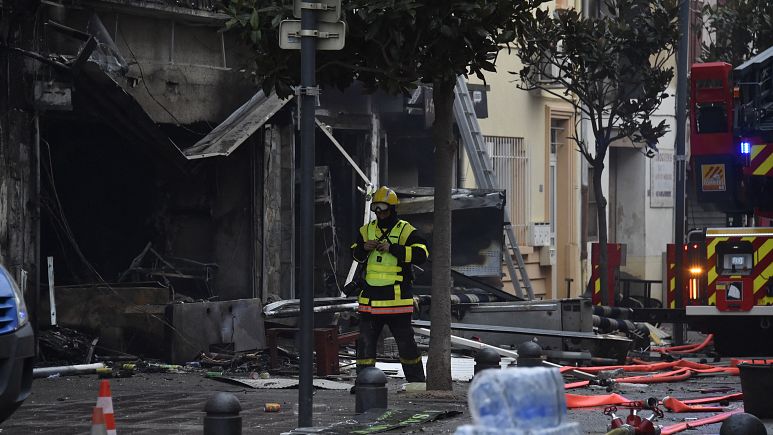 Arson investigation? tells me that it was a bomb. Southern France? Tells me Muslims
France explosion: At least seven killed after blast and fire in Pyrénées town
Several people have died in southwestern France after an explosion and fire ripped through a residential street. The powerful blast occurred on Sunday night in the town of Saint-Laurent-de-la-Salanque near the Spanish border, authorities said. The explosion caused a fire in three small buildings on one of the Pyréneés town's main streets. The bodies of seven people -- including a baby and another child -- have so far been pulled from the rubble. One man was wounded after jumping from a second-storey floor to escape the flames, with at least thirty others suffering minor injuries. Public prosecutor Jean-David Cavaillé told reporters that the number of victims is "provisional" and "may, unfortunately, change". "There are one or two people [missing] and we need to know if they are alive," he added. The town hall said a number of local residents had been provided with accommodation after being evacuated by firefighters. An investigation into "arson resulting in death" has been launched, Cavaille told a press conference on Monday. But he added that it was "too early" to determine whether the cause of the explosion was "accidental or criminal". French Interior Minister Gérald Darmanin said on Twitter that he was travelling to the scene. "I give my full support to the State services mobilised and to the inhabitants," Darmanin said, "my thoughts are with the victims and their families." Source
Children Among at Least Seven Dead in South of France Explosion and Fire
An arson investigation has been opened into an explosion and fire that killed at least seven, including a child and an infant, in Saint-Laurent-de-la-Salanque, France, on February 14, according to local media. Footage posted by Raphael Campanozzi shows flames engulfing a building on Rue Arago, in Saint-Laurent-de-la-Salanque. Campanozzi provided two videos, from the front and back of the building. He was not hurt in the incident but told Storyful: “I felt the blast since I live two blocks away.” The Fire and Rescue Service of the Pyrenees-Orientales said on Facebook that local emergency services received a call following an explosion at a business, which set fire to the apartments above. Interior Minister Gerald Darmanin made a visit to the scene, where he expressed his sympathies. In a Facebook post he said: “On behalf of the nation, I bring all my support and solidarity to the families and loved ones of the victims.” Credit: Raphael Campanozzi via Storyful
Video Transcript [BOOM!] [CHATTER] [FIRE CRACKLES] [CHATTER] [FIRE CRACKLES]
Source
at February 14, 2022