Following up the January Abu Dhabi DOOM:
Posted by dxv515  January 23, 2022 TENTH WINTER EXPLOSION: EXPLOSIONS ROCK ABU DHABI
When you see Debbie Reynolds know that Abu Dhabi DOOM is here.......KABOOM!
BOMB SCARE Abu Dhabi explosion: Gas cylinder blast sparks fireball in building as cops swarm street over terror attack fears
A MASSIVE fireball ripped through a building in Abu Dhabi last night after a gas cylinder exploded - with cops fearing a possible terror attack. Local residents were seen fleeing the scene as the blast sparked a fire after two loud bangs rang out across the city centre. Footage taken at the scene shows police and emergency services rushing to the blaze after conflicting reports emerged about the blast. One witness wrote online: "Everyone is talking about the explosions in Abu Dhabi, it was next to our hotel, it looks like fire. "But we definitely heard two explosions." The blast initially sparked concerns over the Chelsea squad, who were pictured training in Abu Dhabi just days ago ahead of their Club World Cup campaign. The US Embassy in Abu Dhabi warned Americans of reports of a possible missile or drone strike having occurred over Abu Dhabi, without elaborating. Source 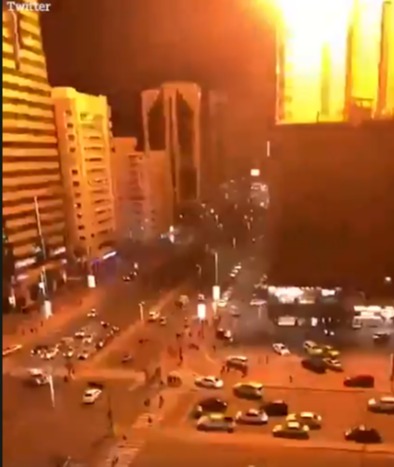