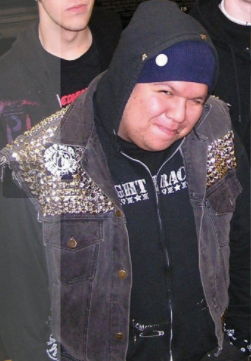 Winnipeg car ramming suspect identified as Antifa member
The suspect arrested over the car-ramming attack against the "Freedom Convoy" protesters in Winnipeg, Canada is an Antifa member with a long history of far-left militantism in Manitoba. David Alexander Zegarac, 42, of Headingley, Man., allegedly sped off to try and escape after the attack on Feb. 4, 2022, which injured four people. He ran multiple lights and resisted arrest when he was finally caught around 40 minutes later.

Zegarac was the frontman of the antifa punk band Brat Attack until the record label dropped the group because of multiple accusations of sexual assault against Zegarac in 2015. One of the accusers said she was only 13 when he groomed her and raped her.

Zegarac's music is extremely political, features violent themes and was popular with the local antifa anarchist punk scene in Manitoba and other parts of Canada. He performed in multiple other short-lived antifa bands as well. On Deviant Art, he posted antifa art under the username, "DaveyBrat." One drawing shows an antifa member in black bloc hurling a firebomb. Zegarac's YouTube channel features his music and performances. A song from seven years ago is called, "Bash the Fash" and the video features the Antifa black and red flag logo. [Link:

With the revelation of Zegarac's identity and the emergence of his deep roots in Canada's antifa punk scene, antifa supporters who know him are going into damage control. Winnipeg Punks, whose current avatar on Facebook is a crossed out "convoy," released a statement saying Zegerac was part of Antifa and Anti-Racist Action (another militant far-left, antifa group), but that he was a "poser" and was "despised." [Link: https://archive.is/RCOBI]

Zegarac has been charged with four counts of assault with a weapon, failing to stop at the scene of an accident and dangerous operation of a vehicle causing bodily harm. A Winnipeg police spokesman said in a news conference the day after the attack that they couldn't speak to the driver's motivations. Source