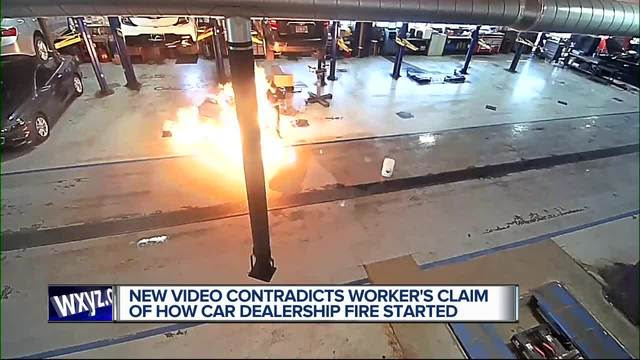 STERLING HEIGHTS, Mich. (WXYZ) - New surveillance video has revealed what really happened minutes before the massive fire at Buff Whelan in Sterling Heights.What the cleaner said to a 911 operator isn’t adding up to what was caught on camera. The car dealership decided to release this video Friday saying, “the video speaks for itself.” Caller: I was scrubbing the floor and I don't know something was leaking gas and it caught fire. I have severe burns on my arm. Operator: Is the fire still burning? Caller: I believe so, yes I ran out of the building. There's a car in the shop on fire. Sh** is blowing up I need people here now.Operator: What exactly were you doing when it caught fire, you said something about the floors? Caller: I was scrubbing the shop floors and I think there's a gas tank on the ground and I think there was fuel leaking out of it. When I went over it exploded. I didn't mean to go over it cause I knew there was gas. I tried going around it and I must have barely touched it and the thing exploded. Source