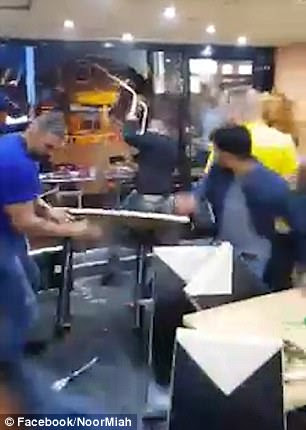 Shocking moment 'Wild West' brawl erupts in a Manchester restaurant as diners hurl chairs, flip over tables and fling plates at each other while terrified families duck for cover

A shocking video of a brawl erupting in a restaurant has emerged online. Families and young people were dining at Afghan Cuisine in Wilmslow Road, Manchester, when the fight broke out. The footage, published online by diner Noor Miah, shows several men climbing over furniture in a desperate bid to flee the restaurant quickly while others hurl plates and throw chairs. Shouting, loud crashes of crockery and screams can be heard as the men weave their way through the furniture and out of the restaurant. At one point, a man in a bright yellow top is seen trying to get through the chaos when a plate smashes him in the head. He appears to recover quickly as he manages to successfully head down some stairs with several others. Daily Mail >>>>