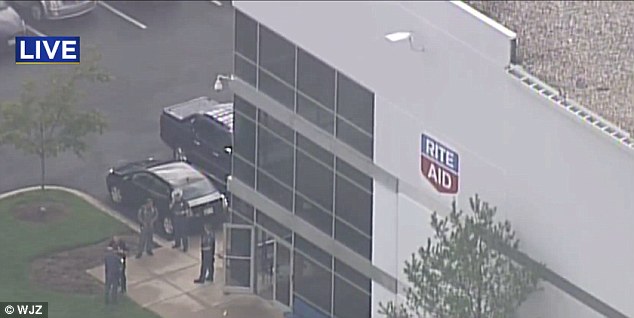 Three people have died and eight others are injured after a shooting at a Rite Aid warehouse in Aberdeen, Maryland, after a woman opened fire this morning. The shooting took place in the Liberty Building on Thursday at 9.09am where around 30 people work. It is part of a larger center where around 1,000 are employed. WBAL-TV, a local network in Maryland, reports that the shooter is a woman who is now in hospital. Police have refused to confirm anything other than that 'multiple' people are dead and 'multiple' are injured. At a press conference on Thursday, Harford County Sheriff Geoff Galer said the shooter was in a critical condition. They used a handgun to carry out the attack 'There are multiple wounded and multiple fatalities. Based on what we know, the lone suspect is in custody and is in critical condition at a local hospital. 'It appears to be a single weapon used, a handgun. No shots were fired by any law enforcement officers,' he said. The warehouse is at the intersection of Spesutia Road and Perryman Road. Nearby are other businesses, a school, a church and an apartment complex. Source