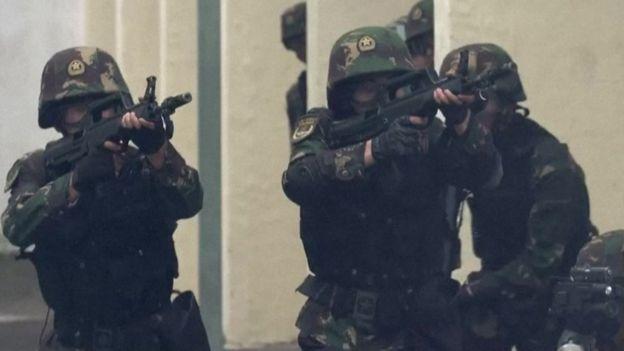 Just on the heels of new reports of a significant build-up of Chinese security forces on Hong Kong's border, with the White House monitoring what an admin official described as "a congregation of Chinese forces" outside the city, the chief of the Chinese military garrison in Hong Kong has warned that the army stands ready to "protect" Chinese sovereignty. A military crackdown could be imminent, as we warned earlier, against the massive anti-Beijing protests which have gripped Hong Kong over the past month, and which last week escalated to vandal attacks on the central government’s liaison office in the semi-autonomous city, as The New York Times reported. Further upping the ante, new threatening footage showing an emergency response "drill" involving Chinese troops taking positions around the city was unveiled by the military on Wednesday at an event honoring the People’s Liberation Army’s (PLA’s) Hong Kong garrison. The footage was described as "a promotional video showing various activities and stating that troops stationed in the city were able to protect its long-term stability." Source