DOOM IN EL PASO TODAY! Will Beto O'Rourke Draw Down Death And Destruction To EL PASO For Publicly BLASPHEMING THE HOLY NAME OF JESUS On MSNBC....More Mass Shootings To Come.....

Those who drive carts cannot speak without putting the name of my Son in the middle. Our Lady of La Salette 19 Sept. 1846 (Published by Mélanie 1879)

Woe to the inhabitants of the earth! God will exhaust His wrath upon them and no one will be able to escape so many afflictions together. Our Lady of La Salette 19 Sept. 1846 (Published by Mélanie 1879)

So at 6:42 AM when Beto should be at the Holy Sacrifice of the Mass - he instead blasphemes the Holy Name of Jesus on live TV on MSNBC.

Did MSNBC bleep out the Blasphemy? NO.

Apostate Catholic Beto has a fake name and is a fake Catholic.

Vile Catholics who willfully Blaspheme the Holy Name of Jesus will be punished.

Beto will also bring about God's Vengeance down upon those in El Paso..

Will there be a terrible and horrific event today in El Paso?

Beto blames Trump then blasphemes the Holy Name of Jesus..... 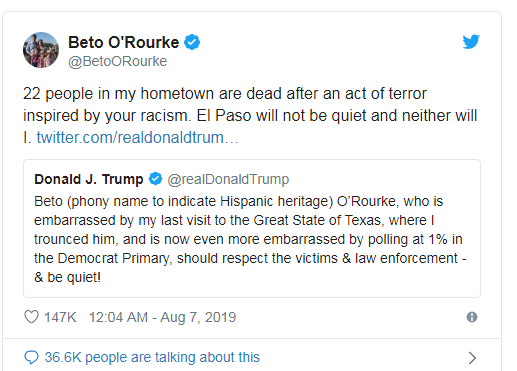 'Jesus Christ! Of course he's racist!' Beto O'Rourke explodes at Trump after weekend shootings and drops F-bomb at reporters as Jerry Nadler says violence due to president's rhetoric 'reminds me of the 1930s in Germany'

Two of President Donald Trump's most vocal opponents compared his government to Adolf Hitler's on Monday, saying the president's prejudices against Hispanics and Muslims resemble the Nazis' hatred of Jews. Former Texas Rep. Beto O'Rourke and House Judiciary Committee Chairman Jerry Nadler stripped the bark off the president in back-to-back appearances on MSNBC's 'Morning Joe' program, blaming Trump's past rhetoric for Saturday's mass-shootings in Dayton, Ohio and El Paso, Texas. O'Rourke, who represented El Paso in Congress until this year, cited Trump's campaign-era call for a 'ban on Muslims entering the country,' a move he made in response to a 2015 gun massacre by suspected ISIS sympathizers in California. He said Trump had declared 'all people of one religion [are] inherently defective and should be banned from the shores of this country.' 'The only modern western Democracy that I can think of that said anything close to this is the Third Reich, Nazi Germany.' Source

Will there be an attempt on the life of the President today in El Paso?

Or maybe some other violent event to take place in El Paso today?

If so - know that Beto did this.