TWELFTH SUMMER EXPLOSION ON TIME! House Blows Up In OHIO.... 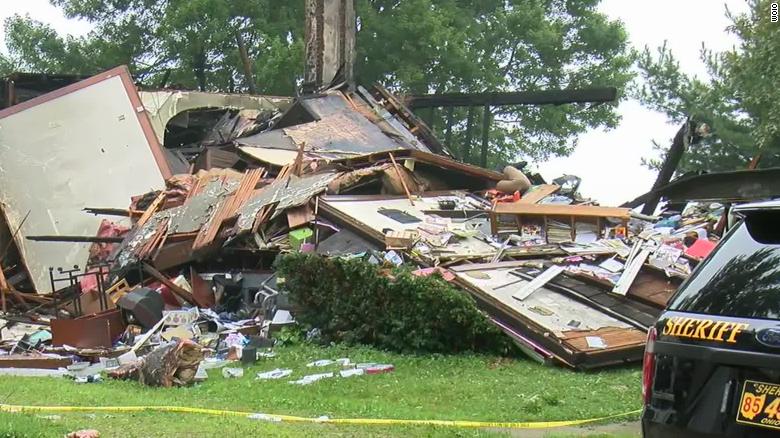 (CNN) Racial slurs and a swastika were found spray-painted on a garage at the scene of a house explosion in Ohio, officials said Wednesday.  Wayne County Sheriff's deputies and fire officials responded to a 911 call around 12:40 a.m. to find the home in Sterling, south of Cleveland, engulfed in flames, Sheriff Travis Hutchinson told reporters. The side of the home was blown out, the sheriff said. Authorities believe the fire was intentionally set, he said. The incident is being investigated as a possible hate crime, the sheriff said. "There were some racial slurs and a swastika that was spray painted on (the garage)," Hutchinson said. "We're not going to tolerate that type of activity and behavior here." An interracial couple lives in the home, according to CNN affiliate WOIO. But the house was unoccupied at the time of the explosion, the sheriff said. The home was being renovated after a blaze last month. Construction workers smelled gas Tuesday and called the gas company, which turned off the gas. The FBI is aware the incident, said Special Agent Vicki Anderson of the FBI's Cleveland Office. Brad and Angela Frase have lived in the home for 23 years, WOIO reported. Angela Frase told the station she arrived at the home to find it in flames. "It was done, there was nothing that could be saved," she said. The sight of the racial slurs and swastika made her sick, she told WOIO. "It was like, 'this didn't just happen.' I don't understand it,'" Frase said Source
Following up SUMMER EXPLOSIONS Posts: