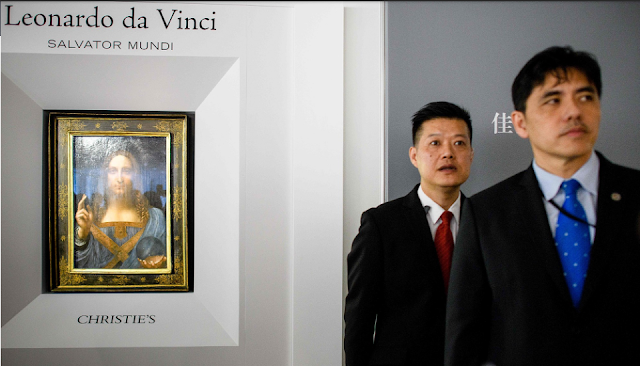 A man (right, wearing blue tie) identified by local Hong Kong media as former CIA agent Jerry Chun Shing Lee stands in front of a member of security at the unveiling of Leonardo da Vinci's 'Salvator Mundi' painting at the Christie's showroom in Hong Kong on on Oct. 13, 2017. Source

13th of October is the Feast of Our Lady of Fatima.

Leonardo da Vinci's 'Salvator Mundi' belongs in a Catholic Church not in the hands of a godless Muslim Prince...

An ex-CIA agent has pleaded guilty to spying for China, the US justice department says, in a case believed to be linked to the dismantling of a US espionage network.

Jerry Chun Shing Lee, 54, left the CIA in 2007 to live in Hong Kong, where he was recruited by Chinese agents.

Prosecutors say the naturalised US citizen was then paid to divulge information on US covert assets.  This led China to bring down a network of informants between 2010 and 2012.

About 20 informants were killed or jailed during that period - one of the most disastrous failures of US intelligence in recent years.

The US Assistant Attorney General for National Security, John Demers, said Lee's case was the third involving US agents and China in less than a year.

"Every one of these cases is a tragic betrayal of country and colleagues," he said.

What did Lee do?

Lee, who worked for the CIA between 1994 and 2007, pleaded guilty to conspiracy to deliver national defence information to aid a foreign government in a court in Virginia on Wednesday, the justice department said in a statement.

It said Lee was contacted by the Chinese intelligence agents in 2010. They offered him money, promising to take care of him "for life" in exchange for the required secret information. Hundreds of thousands of dollars were deposited in his Hong Kong bank account between May 2010 and December 2013.

Mr Lee created a document containing information about CIA activities, including locations to which US agents would be assigned.

In 2012, FBI agents searched a hotel room in Hawaii registered in Mr Lee's name and found a USB drive. Investigators found the document on unallocated space in the drive, suggesting it had been deleted.

The search also revealed Lee to have a day planner and address book containing notes of intelligence provided by CIA agents, their true identities, operational meeting locations and phone numbers, and information about covert facilities.

Lee was interviewed by CIA officers in 2012 during which he said he had met Chinese intelligence officers but concealed the fact that they had set him tasks, the justice department said. In 2013 he first denied knowing about the document on his USB drive and then admitted he had created it but said he had never handed it on to Chinese agents.

Mr Lee was arrested at New York's JFK airport in January 2018. He will be sentenced in August.

Just like you took away Leonardo da Vinci's 'Salvator Mundi' from the Catholic Church...

The $450 million question: Where is Leonardo da Vinci's 'Salvator Mundi'?

When bids for Leonardo da Vinci's "Salvator Mundi" hit $200 million there was an audible gasp in the auction room. At the $300 million mark, onlookers broke into applause. By the time the painting sold for $450.3 million, Christie's in New York had witnessed one of the most dramatic moments in recent art history. Once dismissed as a copy and sold for just £45 ($57) in the 1950s, this mysterious depiction of Christ had become -- by some considerable margin -- the most expensive artwork ever to appear at auction. And the drama didn't stop there. "Salvator Mundi" hasn't been seen in public since that evening in November 2017. Its whereabouts have become the source of intense speculation after the Louvre Abu Dhabi, which had previously announced it would display the painting, last year postponed the grand unveiling without explanation. The most common theory is that the 500-year-old artwork is sitting in storage in Switzerland -- specifically in Geneva, where, according to The New York Times, more than a million works of art are kept in secretive tax-free warehouses by collectors and galleries. But last week, another theory emerged in an opinion piece by art dealer Kenny Schachter published on Artnet: that the last known privately-held Leonardo is on a luxury yacht owned by Saudi Arabia's Crown Prince Mohammad Bin Salman. Source

The days keep dragging on
Those rats keep pushing on, whoa
The slowest race around
We all just race around, whoa

No sense in signing up
You're names already in
Go ahead, yea, fuck it up,
The next guy pays for it

I ain't dead yet!