The Archbishop complains that the US President's visit to JP Shrine was reprehensible...

I find it baffling and reprehensible that any Catholic facility would allow itself to be so egregiously misused and manipulated in a fashion that violates our religious principles, which call us to defend the rights of all people even those with whom we might disagree. Saint Pope John Paul II was an ardent defender of the rights and dignity of human beings. His legacy bears vivid witness to that truth. He certainly would not condone the use of tear gas and other deterrents to silence, scatter or intimidate them for a photo opportunity in front of a place of worship and peace. Source 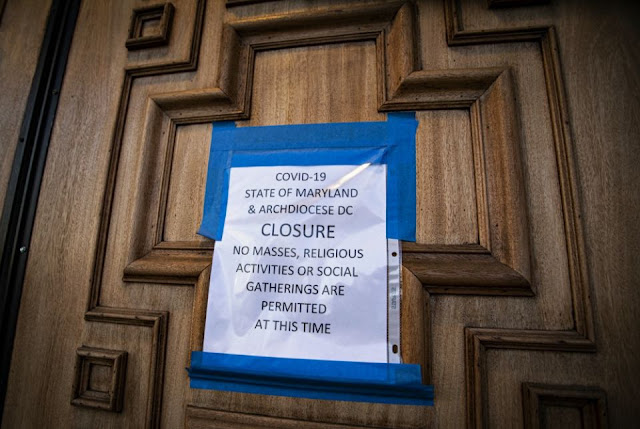 “The priests, ministers of my Son, the priests, by their wicked lives, by their irreverence and their impiety in the celebration of the holy mysteries, by their love of money, their love of honors and pleasures, and the priests have become cesspools of impurity. Yes, the priests are asking vengeance, and vengeance is hanging over their heads. Woe to the priests and to those dedicated to God who by their unfaithfulness and their wicked lives are crucifying my Son again! The sins of those dedicated to God cry out towards Heaven and call for vengeance, and now vengeance is at their door, for there is no one left to beg mercy and forgiveness for the people. There are no more generous souls; there is no one left worthy of offering a stainless sacrifice to the Eternal for the sake of the world. Our Lady of La Salette 19 Sept. 1846 (Published by Mélanie 1879)

“Woe to the inhabitants of the earth! God will exhaust His wrath upon them and no one will be able to escape so many afflictions together.Our Lady of La Salette 19 Sept. 1846 (Published by Mélanie 1879)

“The chiefs, the leaders of the people of God have neglected prayer and penance, and the devil has bedimmed their intelligence. They have become wandering stars which the old devil will drag along with his tail to make them perish. God will allow the old serpent to cause divisions among those who reign in every society and in every family. Physical and moral agonies will be suffered. God will abandon mankind to itself and will send punishments which will follow one after the other for more than thirty-five years.  Our Lady of La Salette 19 Sept. 1846 (Published by Mélanie 1879)

“The Society of men is on the eve of the most terrible scourges and of gravest events. Mankind must expect to be ruled with an iron rod and to drink from the chalice of the wrath of God. Our Lady of La Salette 19 Sept. 1846 (Published by Mélanie 1879)