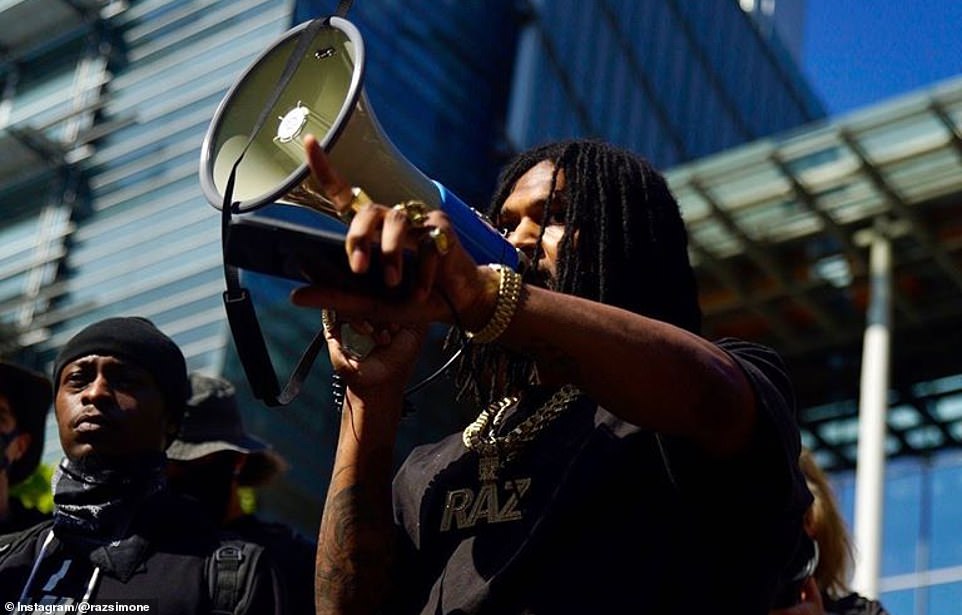 Some claimed that rapper Raz Simone had established himself as a 'warlord' within the CHAZ, and was patrolling with armed men.

On Wednesday, video emerged that showed Simone and several other men confronting another man within the CHAZ, accusing him of tagging over someone else's graffiti.

'We are the police of this community now!' one member of the Simone's entourage is heard telling the man, who shrugs them off and continues tagging the side of a building.

The video shows the confrontation escalate quickly as Simone's entourage demands the tagger leave, as shoving breaks out and someone shouts 'chill, chill!'

Shouting continues as the tagger is driven away and followed for several several blocks.

'For your own safety, you need to go,' the woman filing the video is heard telling the tagger at one point. 'We had to get to the point where physically addressing it was the best way to get our point across.'

Simone has called for the long-term occupation of the area, tweeting: 'Come out now & hold it down.'

'We’ll be here as long as it takes so bring a tent and a blanket,' he added.

Simone responded to the president's tweets on Wednesday night, writing: 'The President really put a hit on my head. I’m not a Terrorist Warlord. Quit spreading that false narrative. The world has NEVER been ready for a strong black man. We have been peaceful and nothing else. If I die don’t let it be in vain.' Source

Raz Simone and crew assault a man for tagging. Man said repeatedly he was kicked in the head, punched and had his glasses broken. For tagging #seattleprotests #seattle pic.twitter.com/B1d2dPSoQB
— hernandez1987 (@WeAreAntifa2020) June 10, 2020