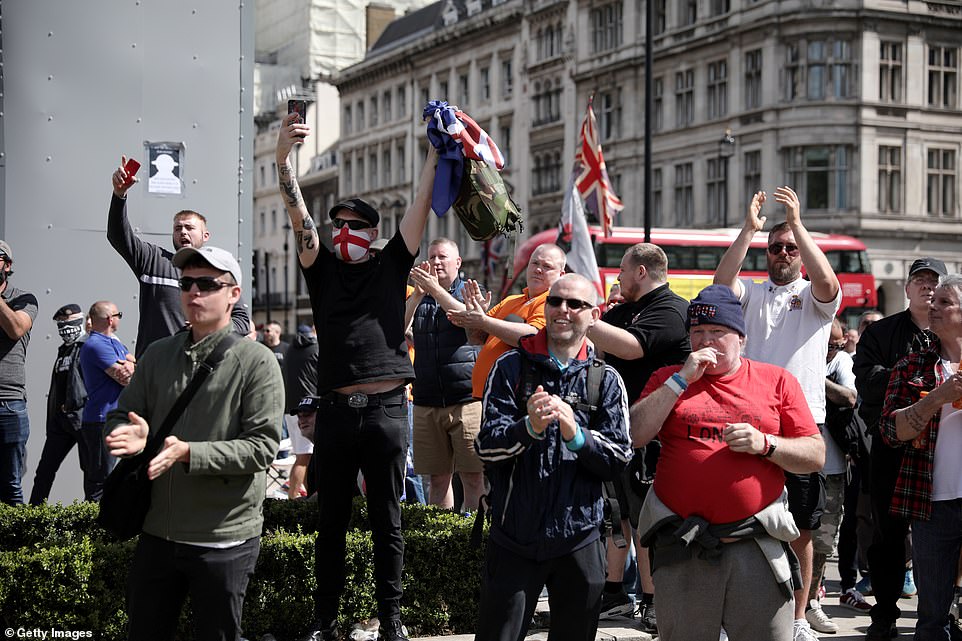 Bring down Churchill! BLM organiser calls for memorial of wartime leader to be removed - as Sadiq Khan says boarding up of sculptures was necessary due to threat from far-right as 5pm curfew is introduced

A senior Black Lives Matter organiser has called for Winston Churchill's statue to be removed from Parliament Square - as activists geared up for protests which are feared to be under threat of violence from the far-right.

Imarn Ayton, 29, a figurehead of the movement who has given speeches alongside Star Wars actor John Boyega, said a monument to anyone who has made racist comments - including the wartime PM - is offensive and belongs in a museum.

But she urged campaigners to stay off the streets of London to prevent rallies exploding into a 'race war' against the far-right, who are among those trooping to the capital to defend targeted sculptures.

Paul Golding, the leader of far-right group Britain First, was pictured at the Cenotaph this morning wearing a top emblazoned with the words 'white lives matter'.

Hundreds of pro-statue activists have gathered at the Whitehall memorial where a large crowd were seen singing the national anthem, while many others have surrounded the Churchill statue.


Yet Mayor of London Sadiq Khan today defended his decision to board up monuments in Westminster by pointing to possible violence from far-right groups.

He told Radio 4's Today programme this morning: 'We have intelligence that extreme far-right groups are coming to London, they say to protect the statues but we think these statues could become a flash point for violence.

'And we are worried in far-right groups getting involved in violence, vandalism and disorder with those protesting as part of the BLM movement.

'And that's one of the reasons why I'm asking people to stay away from central London.'

Police are still bracing for large crowds to take to the streets, as they did yesterday in Trafalgar Square despite pleas from Boris Johnson not to attend for fear of spreading coronavirus.

Scotland Yard is desperate to keep control of London after last weekend's largely peaceful protest was hijacked by pockets of violence, which targeted constables.

Police chiefs have imposed a 5pm curfew on the demonstration and warned that officers are ready to make arrests.