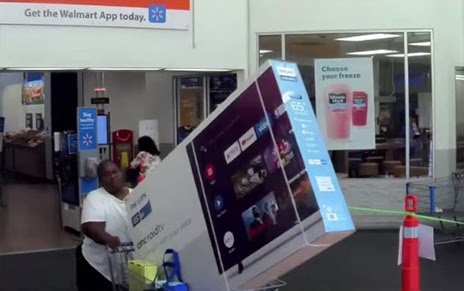 When stealing from Walmart in broad daylight, it is best to work your way up to the 65” Ultra HD television. Florida cops are seeking to identify the woman who Sunday afternoon tried to push a shopping cart containing the massive TV out of a store in Mulberry, a town 40 miles east of Tampa. According to police, the suspect, accompanied by a female cohort, placed assorted electronics items into her cart before adding the 65” Philips TV, which sat precariously in the cart. When the woman bypassed the checkout lines and headed for the door, Walmart security stopped her and asked to see a receipt for the items in her cart. The woman could not produce evidence that she had paid for the merchandise. At this point, the woman’s accomplice took the smaller items from the cart and placed them in her car. The duo then fled in the vehicle, leaving the $450 TV behind. The suspect’s eventual apprehension seems likely since her attempt to boost the TV was captured by Walmart surveillance cameras (as seen above) Source