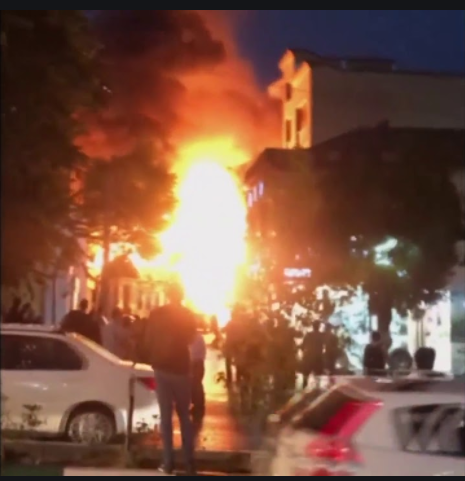 Iranian police and judicial officials say a number of arrest warrants have been issued in connection with a massive explosion that was followed by a huge fire at a medical center in Tehran, which claimed the lives of 19 people — mainly doctors and medical staff. The blast hit the five-story Sina At’har clinic in northern Tehran on Tuesday night, killing 15 women and four men and injuring 14 others. More than half of the victims were among the clinic’s medical personnel, according to Iran's Medical Council. It took the firefighters two hours to contain the blaze that followed the blast, said Jalal Maleki, the spokesman for Tehran Fire Department, adding 20 people were rescued. Speaking to IRNA news agency, Mehdi Forouzesh, head of the Legal Medicine Organization in Tehran Province, said the forensic institute is working to identify the victims. The victims were suffocated by the thick smoke and fume from the fire. The bodies were therefore recognizable, eliminating the need for DNA testing. Initial reports suggested the incident was caused by a leak from oxygen tanks stored in the lower levels of the building, but an investigation is ongoing to shed light on the details. On Wednesday, Captain Mohammad Inanlou, head of the public relations department of Iran’s police force, said one person had been taken into custody and three more arrest warrants issued in connection with the incident. Source