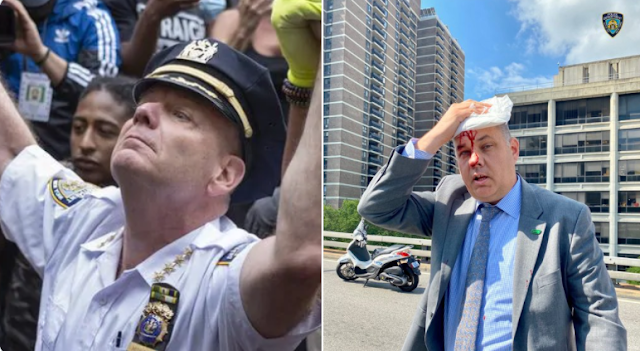 NYPD Chief Terence Monahan
Before And After

WASHINGTON SQUARE PARK (WABC) -- The highest-ranking uniformed member of the NYPD took a knee to show his support for protesters at Washington Square Park.

A visibly emotional Chief of Department Terence Monahan took a knee and hugged George Floyd protesters at the park on Monday evening.

This happened after a few people threw bottles at the cops and a peaceful organizer with a megaphone approached Monahan and he spoke to the crowd.

Monahan said the protest leader asked the chief to take a knee with him for peace.

"I thought it was appropriate. We hugged to show there's solidarity," Monahan said

After Monahan's show of support, protest leaders even asked for help to better organize their marches and promised to keep marching peacefully.

Monahan said that moment was important to show the first step in "getting this together" and "getting those groups out of here," in reference to what the police say are outside groups that are causing the trouble at night.

"The people who live in New York want New York to end the violence," Monahan said. "Get the intruders that are not from this city the h*** out of here and give us back our city."

He urged the group to continue to protest peacefully.

Monahan came up through the ranks as a street cop in the Bronx and said he had never done anything like that with a protester. Source 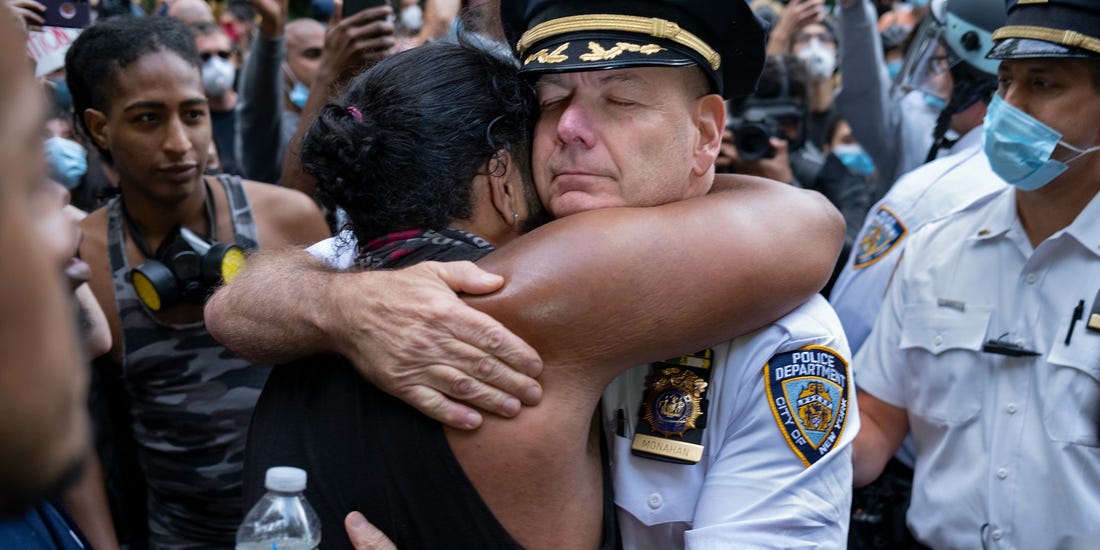 At least four officers were hurt, including Chief of Department Terence Monahan, and 37 people were arrested, police said. Information on charges was not immediately available.

Surveillance video posted on social media by the police department showed a man on the bridge’s pedestrian walkway rushing toward a group of officers and reaching over a fence to bash their heads with a cane.

Police photos of the aftermath showed a lieutenant with a bloodied face, a detective holding a bandage to his head, and a bicycle officer helping a fellow officer dress a head wound.

Monahan, who last month knelt in a show of solidarity with protesters, sustained injuries to his hand.

He and the other injured officers were marching with a pro-police group led by local clergy when they were met on the bridge by anti-police activists, some of whom have been camping outside City Hall in recent weeks to demand severe cuts to police funding.

Some people in the pro-police group marched with a banner that said, “We Support the NYPD.” The leader of that group said they were calling for an end to a recent spate of violence, including the shooting death of a 1-year-old boy in Brooklyn.

Wednesday’s demonstrations were the latest in a wave of protest activity across the country since George Floyd was killed May 25 by Minneapolis police.

The first few nights of protests in New York City were marred by stealing, unrest and violence inflicted both by and on police officers. Since then, protests have largely been peaceful. Source