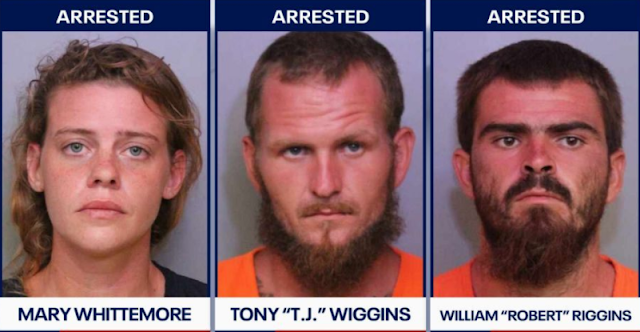 FROSTPROOF, Fla. - A 26-year-old man with 230 felony charges to his name is behind bars and accused of brutally murdering three fishing friends in Frostproof, the sheriff announced Wednesday. Two other suspects were arrested, and officials said it all stemmed from an argument over whether one of the victims sold the suspect's truck.

The suspects were identified as 26-year-old Tony “TJ” Wiggins, his girlfriend, 27-year-old Mary Whittemore, and his brother, 21-year-old Robert Wiggins.

Judd said TJ alone has a criminal history of 230 felony charges, and has regularly been arrested from the time he was 12 years old.

"I didn't stutter. He has 230 charges in his arrest history. Fifteen convictions and two times to state prison at only 26," Judd said. "He's a thug, he's a criminal. He's pure evil in the flesh. He's wild and he's out of control."

Before the triple murder, Robert had one misdemeanor arrest and Mary had no prior criminal arrests.

Investigators said 10 minutes before Friday night's murder, Damion was at a nearby Dollar General before meeting Keven and Brandon at Lake Streety. Detectives said Damion told the clerk he was meeting Keven to go fishing.

A plastic Dollar General bag was found in one of the victim's trucks, along with a receipt dated from that night, which led detectives to the store. There, Judd said, detectives spoke to the clerk, who said the suspects were in the store, and heard Damion say he was going fishing. According to the clerk, they knew Keven would be there.

The sheriff said TJ directed his brother, who was driving that night, to head to the lake. Source