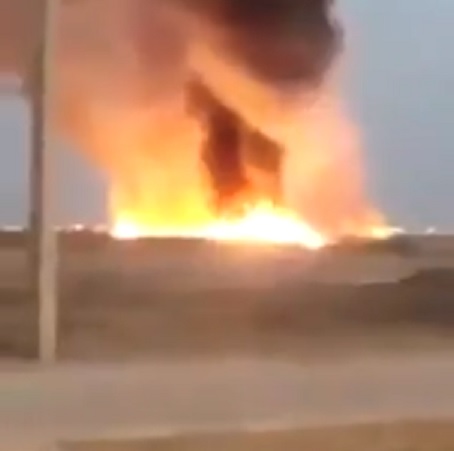 
In latest in series of blasts, explosion reported at Iranian oil pipeline

An explosion was reported in an oil pipeline in Iran Saturday, the latest in a mysterious series of blasts and blazes that have occurred throughout the country.

Several of the recent disasters have struck sensitive Iranian sites, leading to speculation that they could be part of a sabotage campaign engineered by Israel or another Tehran foe.

The latest incident occurred in a pipeline in the Ahvaz region in the south of the country, according to reports in local and social media.

Video shared on social media showed a large fire at the scene. There were no reports of casualties in the incident, and it was not immediately clear what the cause was.

The last odd incident came on Wednesday, when seven traditional wooden vessels caught fire in a factory in the southern Iranian port city of Bushehr. Others have included gas blasts and explosions in Tehran, as well as in the vicinity of military facilities.

A July 2 explosion damaged Iran’s Natanz nuclear facility. A week before that, a large blast was felt in Tehran, apparently caused by an explosion at the Parchin military complex, which defense analysts believe holds an underground tunnel system and missile production facilities.

A Middle Eastern intelligence official was quoted earlier this month by The New York Times as saying the fire that badly damaged a building used for producing centrifuges at Natanz was sparked by Israel and was caused by a powerful bomb.

But the unidentified official said Israel was not linked to several other recent mysterious fires in Iran over past weeks.
Israeli TV reports, without naming sources, have said the blast destroyed the laboratory in which Iran developed faster centrifuges and set back the Iranian nuclear program by one or two years.

Iran last week called for action against Israel following the damage to the Natanz facility, and appeared to acknowledge the fire there was not an accident. Source