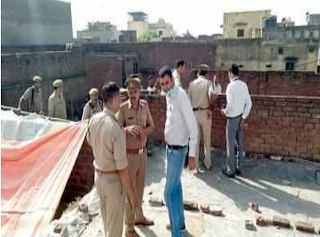 GHAZIABAD:  A seven-year-old girl missing since Saturday afternoon was found dead on the terrace of a mosque in Muradnagar on Sunday morning, her body covered with a gunny bag. The girl’s family has accused the local councillor and his three brothers of murdering her. The girl’s father said he had last seen his daughter accompanying her four-year-old brother to buy a packet of wafers around 12.50pm on Saturday. While her brother returned home, the girl didn’t. The brother, too, couldn’t say anything specific about where he had lost her company. The second of four siblings, the girl studied in Class II of a school in the locality. The girl’s family waited for an hour for her to return and then launched a search in the locality. Around 10pm, they lodged a missing person’s complaint at Muradnagar police station. An FIR was registered against unknown persons under Section 363 (kidnapping) of the IPC. After the body was found on Sunday, police added Section 302 (murder) to the FIR and named Haji Aizaz and his elder brothers, Naushad, Afzal and Izhaar, as accused on a complaint by the father. Source