The man suspected of burning down an animation studio in Kyoto, Japan, was avenging the theft of his novel, it has been reported. Japanese police have named Shinji Aoba, 41, as the suspect in Japan's worst mass killing for two decades, claiming that he entered the premises of the Kyoto Animation Studio with a trolley and at least one bucket of petrol. He is alleged to have shouted "die" when he arrived at the studio, which is better known as KyoAni. He later admitted to police when he was detained, "I did it," the news agency Kyodo reported. Aoba had a mental illness and had previously done time for theft. It is believed that he bought 20 liter gasoline cans at a hardware store and prepared the petrol in a park nearby, the Japanese broadcaster NHK reported. Source 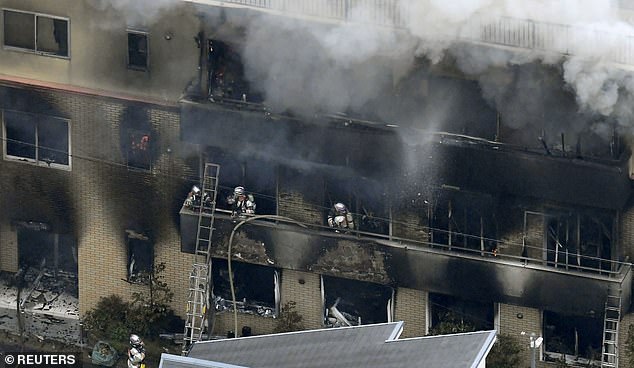 33 confirmed dead in arson fire at animation studio in Japan

TOKYO (AP) — A man screaming "You die!" burst into an animation studio in Kyoto, doused it with a flammable liquid and set it on fire Thursday, killing 33 people in an attack that shocked anime fans across Japan and beyond. Thirty-six others were injured, some of them critically. The suspect was hurt and taken to a hospital. Police identified him only a 41-year-old man who was not a company employee. They gave no immediate details on the motive. Source

Working conditions are grim. Animators often fall asleep at their desks. Henry Thurlow, an American animator living and working in Japan, told BuzzFeed News he has been hospitalized multiple times due to illness brought on by exhaustion.

One studio, Madhouse, was recently accused of violating labor code: Employees were working nearly 400 hours per month and went 37 consecutive days without a single day off. A male animator’s 2014 suicide was classified as a work-related incident after investigators found he had worked more than 600 hours in the month leading up to his death.

Part of the reason studios use freelancers is so they don’t need to worry about the labor code. Since freelancers are independent contractors, companies can enforce grueling deadlines while saving money by not providing benefits.

“The problem with anime is that it just takes way too long to make,” Zakoani, an animator at Studio Yuraki and Douga Kobo, said. “It’s extremely meticulous. One cut — one scene — would have three to four animators working on it. I make the rough drawings, and then two other people would check it, a more senior animator and the director. Then it gets sent back to me and I clean it up. Then it gets sent to another person, the in-betweener, and they make the final drawings.”

Animators make ends meet any way they can. Terumi Nishii, a freelance animator and game designer, earns most of her income from video game animation because she has to take care of her parents. On an animator’s salary, she would have little chance of feeding herself. Source