FRANCE: Gang Of MUSLIM Immigrants Rape A Pony To Death... 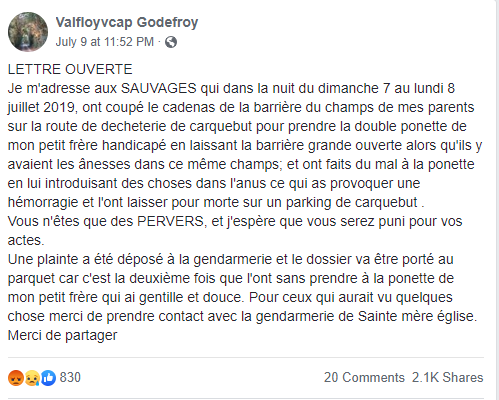 'Sweet, Kind' Pony Gets Raped and Left for Dead by Unknown Assailant in France

he pony was found seriously injured at a parking lot, apparently dumped there by the perp after having his way with the animal.

A bizarre incident recently took place in the Manche department of Normandy, France where a 19-year-old pony got kidnapped and raped by an as yet unknown perpetrator.

The kidnapping took place on the night between of 8 July, when the animal was taken from a fenced-off field near Carquebut and, after the perp had his way with it, left for dead at a nearby parking lot.

As a daughter of the animal’s owner explained, the pony belonged to her handicapped younger brother, and the perpetrator apparently took advantage of the creature’s "sweet, kind" nature as the pony apparently did not have the habit of shying away from approaching people.

"You are only perverts, and I hope you will be punished for your actions", she wrote on her Facebook page, adding that law enforcement had already been formally notified of the incident.

The pony currently remains in a critical condition.

In 2017, a somewhat similar incident took place in Berlin where a 23-year-old native of Syria was arrested by cops after getting caught raping a pony in public. Source