Here We Go....Delusional Trump Supporters Now Turn To An ELECTED MONARCHY....Or How The Forerunner To The Antichrist Gains Power.... 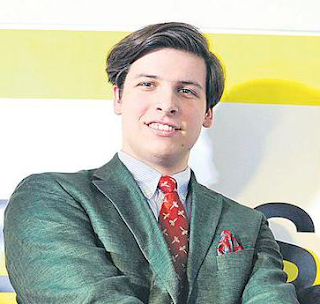 Baron Alexander von Tschugguel
Convert
"A forerunner of the Antichrist, with his troops drawn from many nations, will wage war against the true Christ, sole Savior of the world; he will shed much blood and will seek to annihilate the cult of God so as to be regarded as a god." Our Lady of La Salette 19 Sept. 1846 (Published by Mélanie 1879)

From the pen of a crazed convert manly he man Mr. Ann Barnhardt:
The Great Awakening
If you’re really serious about dumping the heresy of Americanism and having adult thoughts and discourse about the path forward governmentally, let me recommend looking at one of the most stable republics in human history, overthrown only by Freemasons relatively recently: the Venetian Republic. It lasted from ARSH 697 until ARSH 1797. ELEVEN HUNDRED YEARS. Think about that.
I recommend reading Norwich’s “A History of Venice”.
They had what, to my mind, seems to be the best system of governance: an ELECTED MONARCHY. The Venetian monarch was called “the Doge”, or Duke in modern English.
No hereditary nonsense. No imbeciles or degenerate perverts inheriting power just because they happened to be the firstborn son. It’s the perfect combination of meritocracy with the stability of a monarch. And, let us not forget, the Vicariate of Christ was instituted by Our Lord Himself as … an elected absolute monarchy. Quite an endorsement, no?
It’s been staring us in the face all along.
Just one example from over my transom in the past 24 hours +/-…
“The honest truth is that Trump duped a lot of people. I voted for him in 2016. But a hard look at reality leaves one to conclude that he’s in on it and has been this whole time. It’s all been a giant lie. A big show. I didn’t vote in November because I won’t consent to being governed by these people. I’m done with the “voting for the lesser of two evils” garbage. Give me a Catholic monarchy or give me death.“ Source
What's next?
These crazed Rad Trads will move enmasse to Italy in the next several years probably to Steve Bannon's Mountain Top retreat. They will be lead by the forerunner to the Antichrist who will form an army made up of Nationalists from around the world. The Forerunner and his Nationalist army will declare WAR on the Catholic Church and shed much blood. They will one day murder the Fatima Pope and faithful on top a steep mountain (Bannon's Castle).
at January 21, 2021