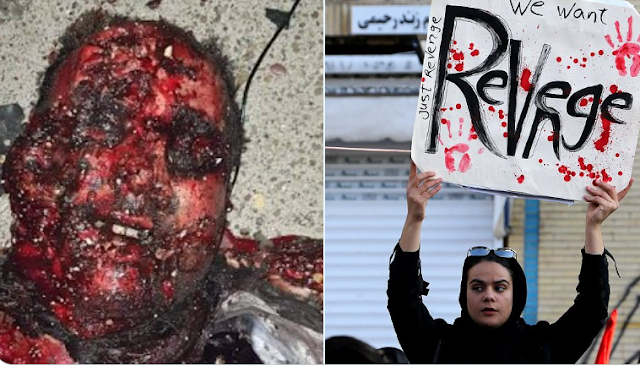 Anniversary Of Soleimani's death is tomorrow.....

Iran says killers of top general Soleimani, including Trump, ‘not safe on Earth’
TEHRAN, Iran — Iran’s judiciary chief warned Friday that Qassem Soleimani’s killers will “not be safe on Earth,” as the Islamic Republic began marking the first anniversary of the top general’s assassination in a US strike. Ebrahim Raisi, speaking at an event in Tehran to pay tribute to Soleimani, said not even US President Donald Trump, who ordered the strike, was “immune from justice.” Soleimani was killed in a US drone strike at Baghdad airport on January 3, 2020, ratcheting up tensions between decades-old enemies the United States and Iran. Source

This is the moment two Islamic Revolutionary Guard generals were killed in the US airstrike on Baghdad airport which also killed Quds commander Qassem Soleimani. CCTV footage filmed close to the airport and shared by Iraqi TV station AhadTV shows a large explosion as one of the two cars was destroyed by precision missiles early on Friday morning. Brigadier General Hussein Jafari Nia and Major-General Hadi Taremi were named among the dead by the semi-official Fars agency, along with Colonel of the Guards Shahroud Mozaffari Nia and Captain Waheed Zamanian. Abu Mahdi al-Muhandis, deputy-commander of the Iraqi-based pro-Iran People's Mobilization Forces, was also among the dead - vaporized after being struck by one of four American guided missiles fired by a Reaper drone. Mohammad al-Shibani, Muhandis's son-in-law, is also said to have died along with Heydar Ali, Muhammed Reza al-Jaberi and Hassan Abdul Hadi, all senior PMF figures. Source