NATION OF ISLAM LOUIS FARRAKHAN
25-YEAR-OLD NOAH GREEN
BOW TIE
Motive?
The Covid-19 Vaccine and the U.S. policy of depopulation “We will not accept your vaccine so you can slow down, because whenever you bring it out, it’s for your people. You give it to them because we are not accepting death. You are the very representative of death itself: the pale horse. Everywhere you have gone in the world, hell went right behind you. We are sick of hell and we are sick of death. So all of you that have made a covenant with death, your covenant is going to be annulled … your agreement with hell will be broken.” —The Honorable Minister Louis Farrakhan Minister
Farrakhan said it would be a declaration of war on all of us if the government tried to physically force us to take the vaccine.  Now that the vaccines are ready, an elevated level of fear of the pandemic has been created to make the people believe they must have the vaccine. Source 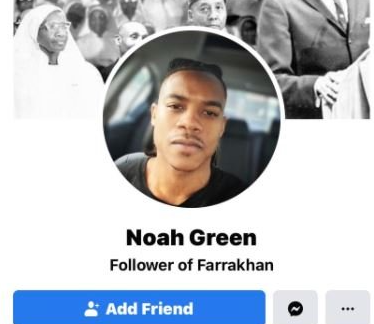 Police officer killed in attack at U.S. Capitol; suspect dead
A Capitol Police officer died Friday after a vehicle "rammed" into a barricade outside the U.S. Capitol complex. The suspect, who was shot by police, also died. Acting U.S. Capitol Police Chief Yogananda Pittman said that an unidentified male suspect slammed his car into two officers, exited the car with a knife in his hand and "lunged" toward them. He was shot by police and taken into custody. All three were transported to the hospital, Pittman said. "It is with a heavy heart that I announce one of our officers has succumbed to his injuries," she said at a press briefing Friday afternoon. The other officer remains hospitalized. Hours after the news conference, Pittman released a statement identifying the officer who had been killed as William Evans. “It is with profound sadness that I share the news of the passing of Officer William 'Billy' Evans this afternoon from injuries he sustained following an attack at the North Barricade by a lone assailant," Pittman said in the statement. "Officer Evans had been a member of the United States Capitol Police for 18 years. He began his USCP service on March 7, 2003, and was a member of the Capitol Division’s First Responder’s Unit. Please keep Officer Evans and his family in your thoughts and prayers.” Pittman has yet to release the name of the suspect. "I just ask that the public continue to keep USCP and their families in their prayers," she added. "This has been an extremely difficult time for U.S. Capitol Police after the events of Jan. 6 and now the events that have occurred here today.” Source
at April 02, 2021