Francois Hollande Has The Blood Of 127 On His Hands For Flooding France With Muslim Invaders!! Hollande Must Hang!!

A huge fire broke out shortly after midnight at the refugee camp known as the 'Jungle' in Calais, France. The fire is not thought to be related to the horrific terror events in Paris despite unsubstantiated claims that the fire was started by activists angered by the migrants presence in France. No casualties have been reported from the site, where hundreds of migrants have been living in difficult conditions after making their long and dangerous journey to Europe. Over 2,500 metres of tents and shelters were burnt down in the fierce blaze which was believed to have been caused by an electrical wire. Daily Mail Read More>>>>>>

France is ready to take in 24,000 refugees as part of European Union plans to welcome more than 100,000 in the next two years, French President Francois Hollande said on Monday, dismissing opinion polls showing public opposition to the move. Hollande said he and German leader Angela Merkel wanted the 28-country EU to back a "permanent, mandatory system" under which each country would be obliged to take its fair share of a total of 120,000 migrants. "This is a crisis, and it is a grave and dramatic one. It can be brought under control and it will be," he told a news conference. Reuters Read More>>>>>>

Francois Hollande has said France will welcome 24,000 refugees as part of an EU-wide plan that "can and will" bring the crisis under control. Speaking at the start of a live TV press conference, the French president said his country has a duty to take in those fleeing war and persecution, and is ready to do so. His comments came as David Cameron prepared to outline Britain's plan to tackle the refugee crisis. The Prime Minister was expected to say that the UK would take "thousands" more asylum-seekers as part of a "fundamental rethink" of its role as a place of refuge. Independent Read More>>>>

Merkel and Hollande Plead for Unity on Refugees in Europe


STRASBOURG, France—The leaders of France and Germany made a strong plea for European unity and demanded the European Union’s asylum rules be revamped as the bloc struggles with the largest influx of migrants in decades. Speaking in the European Parliament on Wednesday on the 25th anniversary of the reunification of Germany, German Chancellor Angela Merkel and French President François Hollande warned of the dangers of nationalism in response to the crisis. “We must not fall prey to nationalist sentiments in these moments. It is precisely now that we need more Europe, not less. We need more than ever before the cohesion and courage that Europe has always shown in the past when it really mattered,” Ms. Merkel said. The German chancellor spoke strongly against the stoking of anti-immigrant feelings, as some nationalist politicians in Europe are doing.“We need to see them as people, not as an anonymous mass, irrespective of whether they have a right to stay or not,” Ms. Merkel said, triggering long applause from the audience. For his part, Mr. Hollande warned of the danger of the EU “going back to national frontiers” if European countries don’t pull together in managing the crisis. He engaged in a heated discussion with Nigel Farage, leader of the euroskeptic UK Independence Party, who said Europe’s inability to guard its own borders is a reason why Britain should leave the EU. “If you don’t want to be part of this community of values, then the only way is to leave Europe,” Mr. Hollande said. “It’s a horrible way, but then leave, leave Europe, leave democracy even.” WSJ Read More>>>>>

French President Francois Hollande has tried to put the record straight insisting that France is not being invaded by refugees as the far right would have people believe. Hollande blasted those trying to kid the population into believing they will soon be overrun by refugees. During a speech in Brussels, where EU leaders had gathered Hollande said: “In terms of numbers, today, France is not subject to an influx of refugees and those who argue that we are being invaded are manipulators and falsifiers, who do this only for political reasons, to scare.” The Local Read More>>>>> 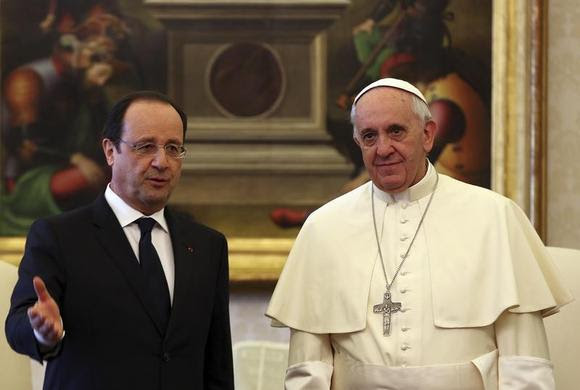