Glory To Allah On London Buses 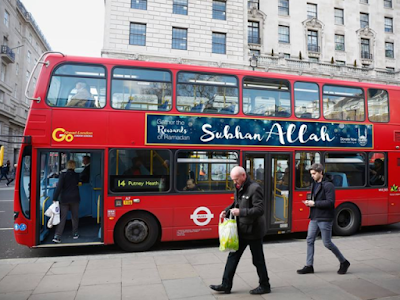 Britain’s largest Islamic charity says it wants to “break down barriers” and portray Islam positively by launching a new advertising campaign which will slap the phrase “glory to Allah” on the side of London buses. The new campaign by Islamic Relief is, ostensibly, targeted at raising donations for their Ramadan aid to Syria, but is attracting attention for the “hundreds” of buses which will be decorated with the phrase “Subhan’Allah”, or ‘Glory to Allah’. Muslims reading the advert are told that to “gather the rewards of Ramadan”, they must to donate to Islamic Relief, an organisation which had its accounts with banking giant HSBC closed after “concerns that cash for aid could end up with terrorist groups abroad”. Public transport has been chosen for the Islamic re-branding in London, Manchester, Leicester, Birmingham, and Bradford – all UK locations with high and growing Muslim populations, reports the Sunday Times. Breitbart Read More>>>>>