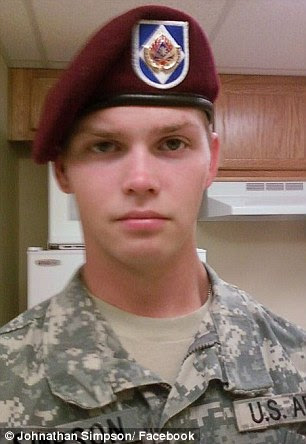 Fort Bragg sergeant, 26, and Afghanistan veteran is charged with kidnapping and raping another soldier in the same unit

A Fort Bragg soldier has been charged with kidnapping and raping another soldier from his same unit. Afghanistan veteran Johnathan Simpson was arrested on Friday and charged with first-degree rape, first-degree kidnapping, and sexual battery. The 26-year-old is accused of kidnapping his victim, also 26, and carrying out the alleged sexual assault in the 1000 block of Bragg Boulevard on April 25. Police said Simpson and the victim are assigned to the same Army unit. Simpson, who is separated from his wife of five years, was arrested at his unit in Fort Bragg, North Carolina, with the assistance of Fort Bragg Military Police, officials said. Daily Read More>>>>>