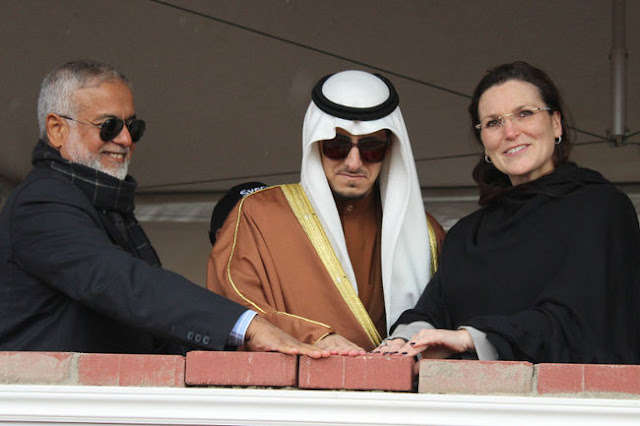 Fort McMurray is home to thousands of Muslims.

New Mosque was built exactly one year ago. The project started on 2 May 2015.

Construction is underway for North America’s largest Islamic community centre project, after Fort McMurray’s Muslim community held their groundbreaking ceremony for the new Markaz Ul-Islam centre in Abraham’s Land. The ceremony for the $50-million, 10-acre multicentre in Fort McMurray’s north end will also feature an Islamic school, a daycare, a recreation centre and a multipurpose hall, built in four phases. Flanked by the mosque, however, will be two new Christian churches - one Catholic and one protestant - and near the future Northside Recreational Centre. “You have proved to the world that multifaiths can live together and work together in harmony and with respect,” said Abdul Salaam Abdo, president of Markaz Ul-Islam, in a speech before the ceremony. “We at Markaz Ul-Islam are proud to be a lead contributor to this partnership.” The massive faith centres are the faithful’s answer to Fort McMurray’s growing population. The original Markaz Ul-Islam mosque, located downtown, was built in 1990. Fort McMurray Today Read More>>>>> 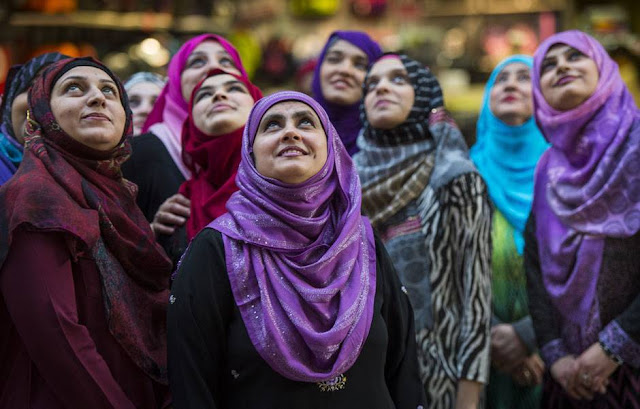 It’s Friday at noon, and a balmy minus 5 – pretty good for Fort McMurray in late November. Crowds are streaming in on foot, and cars are lined up for blocks. Everyone’s heading to the downtown mosque, the Markaz ul Islam, trying to make it in time for afternoon prayers. A man from West Africa comes in with one from Pakistan, walking past an SUV whose licence plate sits in a frame marked “Dubai.” Somali cab drivers are parking, taking a break from their shifts. Most of the faithful are wearing parkas, some with a shalwar kameez underneath. Others arrive in bright yellow construction vests, on their way back from the oil sands. Fort McMurray is home to one of Canada’s fastest-growing Muslim communities. The old mosque – opened in 1990, before oil money started pouring into this Northern Alberta city – is showing its age. In the slush-stained foyer where the men remove their shoes, a well-used light switch is held together by masking tape. On Fridays, demand is so high that they need to split the traditional communal prayer into three shifts, a couple hundred worshippers at a time. Globe & Mail Read More>>>> Salem Kallas loads totes into his van (donated to his family by the Syrian Refugee Support Group) at the Rundle Superstore in Calgary on Thursday, May 5, 2016

'We understand what they're feeling': Syrian refugees in Calgary step up to help Fort McMurray fire evacuees

When Rita Khanchet saw images of a vicious wildfire destroying homes and uprooting tens of thousands in Fort McMurray, she immediately thought of Syria, the homeland she fled just five months ago with her husband and young son. Khanchet and her family know firsthand how scary it is to leave a community, home and possessions behind and she was determined to help the people of Fort McMurray. “It’s not easy to lose everything. We can understand them more than anyone in Canada. We were in the same situation,” said Khanchet, who lives in Calgary. “Me and my family wanted to do something for these people. Canadian society helped us when we came to Canada.” Syrian refugees across Calgary are now giving what little they have to northern Albertans, after Khanchet posted an appeal in Arabic on a private Facebook group the newcomers created and frequent. “(Canadians) gave us everything. And now it’s time to return the favour,” she wrote. A fellow Syrian refugee translated and shared Khanchet’s post with a wider community on the Syrian Refugee Support Group page and within hours offers of help came in from new Canadians determined to give back to their new home. “All the Syrians are saying, ‘I’m ready to give, I’m ready to give,'” said Saima Jamal, a co-founder of the Syrian Refugee Support Group. “It’s amazing. You have to understand how little these guys have…But they understand the idea of an entire city losing their home. That’s something they can easily relate to. They went through that.” Calgary Herald Read More >>>>>>>> 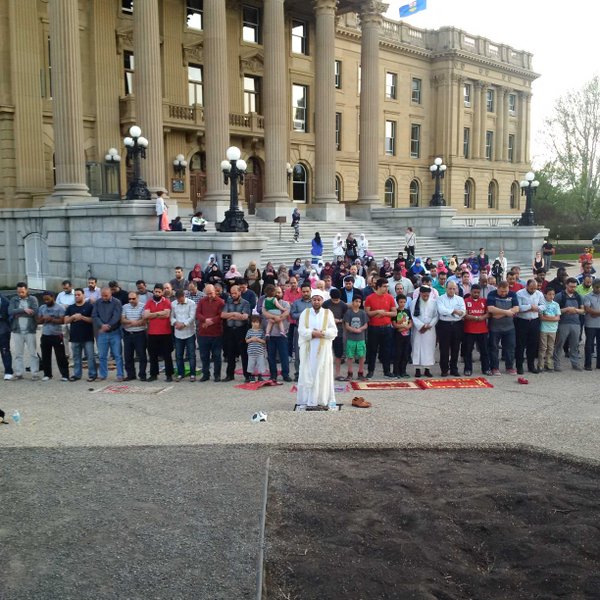 As thousands of people from Fort McMurray, Alberta poured into Edmonton seeking refuge from the wildfire ravaging their community, nearly one hundred Muslims gathered at the provincial legislature to pray for rain. "Whenever there's a drought, our religion has a prayer to make the rain come. And that's what's needed right now for Fort McMurray," said Issam Saleh from the Muslim Association of Canada. "And we will keep praying until it happens." Earlier on Wednesday, the province of Alberta declared a state of emergency after a massive wildfire destroyed 1,600 homes and buildings in Fort McMurray and forced more than 80,000 residents to evacuate to surrounding towns and cities. That night, many were forced to flee again after changing weather patterns threatened the safety of their evacuation centers in nearby communities. The Royal Canadian Mounted Police when went door to door in Anzac, Gregoire Lake Estates, and Fort McMurray First Nation, which had all been accommodating evacuees, after a mandatory evacuation order was issued for them. The regional emergency operations center had just relocated to Anzac, located about 50 kilometers south of Fort McMurray, from the Fort McMurray airport. It planned to move further south to Lac La Biche.Vice News Read More>>>>>> 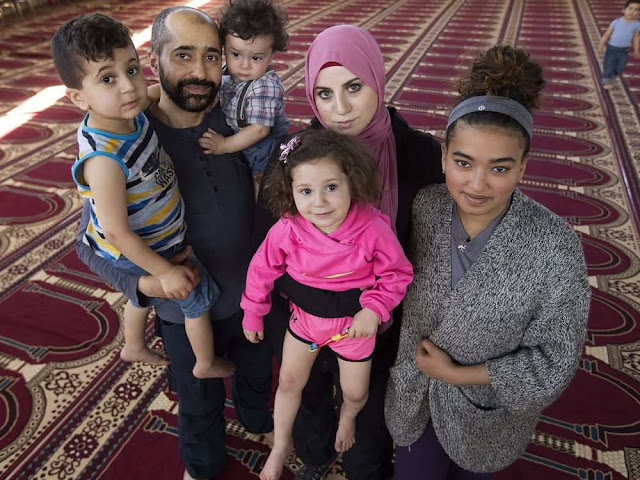 Stories of escape from a city on fire: For many in McMurray, it came down to what was in the tank

“We never thought the fire would jump the river. Never.” So it wasn’t until 6:30 p.m. that he and wife Dunia loaded up their kids — daughters Hanan, 13, and Mariam, 2, and sons Abbas, 4, and Issa, 15 months — and jumped in their car. It was then that Mohamad realized his problem: he only had a quarter-tank of gas, and he couldn’t get gas anywhere in town. But staying wasn’t an option. “I saw my friend’s house burning. I saw it burn to the ground.” They drove out of the city, but then were afraid to drive any further in case they became stranded on the highway before they reached Wandering River. Artima pulled the car onto the grassy median in the centre of Highway 63. “I didn’t know what to do. Thank God for my wife. She said, ‘With God’s help, ask someone for help.’ “ Artima got out of the car and tried to flag down a motorist. Luckily, he says, a man from British Columbia driving a pickup and pulling a trailer stopped to help. The man shared half a tank of gas with him, just enough to get them to the next gas station. “I want to thank this gentleman. I tried to give him money, I tried to get his phone number so I could send him a gift. He just said no. But he looked very happy.” Edmonton Journal Read More>>>>>

Why the Muslim media spin?

Who set the fire?

Humans are the leading cause of wildfires in Canada, says a forest fire researcher who believes the latest blaze that has ripped through parts of Fort McMurray, Alta., is no exception. Mike Flanagan, a professor of wildland fires at the University of Alberta, says the fire's proximity to the city, as well as data that shows there were no lightning strikes in the area, lead him to believe the cause of the fire was likely human. "And in spring it's heavily loaded on the side of people-caused fires," Flanagan said. ctv News Read More>>>>>

Blaming Global Warming For the Fire 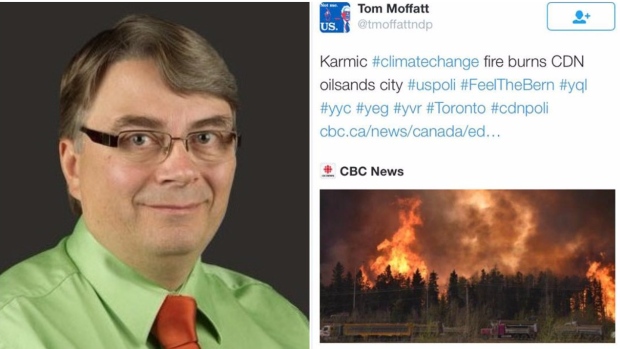