2 Eurofighter Jets Crash Into Each Other Over Germany 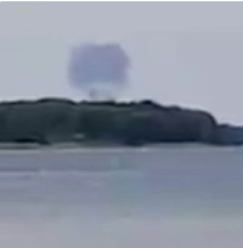 2 Eurofighter jets crash into each other over Germany

Two German Eurofighter jets have crashed in the northeastern state of Mecklenburg-Western Pomerania, the Interior Ministry has confirmed. The planes have fallen in a residential area, according to the German media. The two German Air Force warplanes collided in the air over the small town of Malchow, located some 80km away from the German city of Schwerin. “The Eurofighter [jets] collided in the air and then crashed,” a military spokesman told Der Spiegel magazine. According to the Defense Ministry, one of the jets crashed in a wooded area near the village of Jabel, while the other one fell 10km away, south of the village of Nossentiner Huette. The wreckage of the destroyed aircraft has fallen in a nearby forest, where it apparently caused a fire. A video posted on social media by a local radio broadcaster shows plumes of black smoke billowing over a forest at the purported crash site. Some parts of the planes also hit a residential area, a local newspaper, SVZ, reports. Source