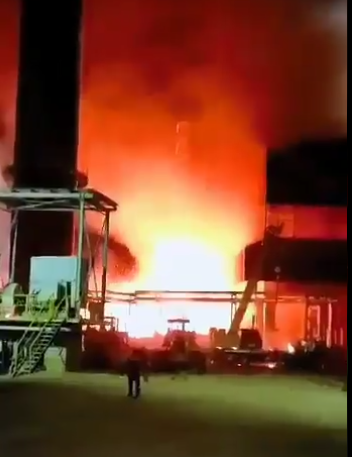 Fire at Iran steel plant after blast, no casualties reported -reports
A fire broke out after an explosion at a steel plant in southeastern Iran, but an official said the blaze was brought under control and there was no immediate report of casualties, semi-official Iranian news agencies said on Sunday. "Local sources in the city of Zarand in Kerman province reported a severe explosion and fire at the Zarand Iranian Steel plant," Fars news agency said on the Telegram messaging app. Tasnim news agency quoted the local governor as saying the incident was caused by a spill of molten material. "The incident is currently under control. No casualties have been reported so far," the unnamed governor was quoted by Tasnim as saying. Source

🔴 SEVERE EXPLOSION AND FIRE AT THE ZARAND IRANIAN STEEL PLANT IN ZARAND CITY, KERMAN PROVINCE, IRAN.
Acc. to local sources, the #explosion & fire occurred in the blast furnace section of the Plant.#Video Via Theallfred#BREAKINGNEWS #FLASH pic.twitter.com/TPtSCXvoSR