Our Lady Of La Salette On 600+ Earthquakes Have Shaken The California-Mexico Border Since Saturday -- The Largest Registering 5.3 Salton Sea..... 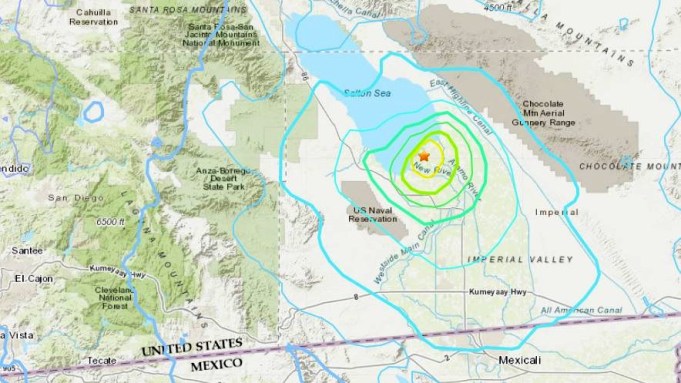 “Woe to the inhabitants of the earth! God will exhaust His wrath upon them and no one will be able to escape so many afflictions together. Our Lady of La Salette 19 Sept. 1846 (Published by Mélanie 1879)

“The Society of men is on the eve of the most terrible scourges and of gravest events. Mankind must expect to be ruled with an iron rod and to drink from the chalice of the wrath of God. Our Lady of La Salette 19 Sept. 1846 (Published by Mélanie 1879)

More than 600 earthquakes have shaken the California-Mexico border since Saturday -- the largest registering 5.3
(CNN) More than 600 small earthquakes have been recorded this weekend in a rural area near the Salton Sea in Southern California, with the largest having a magnitude of 5.3, a US Geological Survey geophysicist told CNN. Geophysicist Randy Baldwin said 603 temblors with a magnitude of at least 1 happened in the area from Saturday to just before sunrise Sunday. The quakes were centered near Calipatria, along the San Andreas Fault and about 30 miles north of the Mexican border, the USGS map shows. The area is not heavily populated and has been known to have "swarms in the past," USGS seismologist Paul Caruso told CNN on Saturday.A CNN crew in Orange County said they did not feel any of the quakes Saturday. Four of the quakes measured greater than magnitude 4, and 29 were greater than magnitude 3, Baldwin said. Elsewhere, two 5.9 magnitude earthquakes struck in the Pacific Ocean around 89 and 98 miles west of the coastal town of Gold Beach, Oregon, after 1 a.m. PT Friday, the USGS reported. Source
PROPHECY OF MELANIE ON TWO POPES:
"I didn't see, I don't see any Great Pope or Great Monarch before an extremely great tribulation, horrifying, terrible and general for all Christendom. But before that time, twice there will be a short lived peace; TWO shaky, servile, doubtful popes" Mélanie

REMEMBER - THE 35+ YEARS WORTH OF CHASTISEMENTS DO NOT START UNTIL THE TWO POPES ARE DEAD......
“The great chastisement will come, because men will not be converted; yet it is only their conversion that can hinder these scourges. God will begin to strike men by inflicting lighter punishments in order to open their eyes; then He will stop, or may repeat His former warnings to give place for repentance. But sinners will not avail themselves of these opportunities; He will, in consequence, send more severe castigations, anxious to move sinners to repentance, but all in vain. Finally, the obduracy of sinners shall draw upon their heads the greatest and most terrible calamities. Mélanie

"I protest highly against a different text, which people may dare publish after my death. I protest once more against the very false statements of all those who dare say and write First that I embroidered the Secret; second, against those who state that the Queen Mother did not say to transmit the Secret to all her people." Mélanie
at June 06, 2021