In California's rural, conservative north, there are big dreams for cleaving the state

The two young, blond women in figure-flattering ball gowns hoisted whiskey and shotguns. An auctioneer rattled off bids. Above the stage in the banquet hall hung a green flag for the 51st state of Jefferson, with its pair of Xs called a “double-cross” representing a sense of rural abandonment. Hundreds of people packed into the Veterans of Foreign Wars Post 9650 hall on this chilly Saturday night, ready to crack open wallets to help fund their dream of carving — out of California’s northernmost reaches — a brand new state. Someone offered $350 for a state of Jefferson belt buckle. Someone else won a lamb, still in its mother’s womb, that should be born in time to be butchered for Easter. Outside, vehicles bore bumper stickers supporting President Trump and the 2nd Amendment. “We Okies are fun, aren’t we?” one man quipped. The scene last month in this small Shasta County city seemed like a perfect we’re-not-in-California-anymore-moment. That is, if you only knew California as the diverse, liberal bastion whose elected officials have tried to stymie the Trump administration’s moves on immigration, legalized marijuana, climate change and so on. But the so-called Northstate is looking less and less like the rest of the Golden State. The vast, sparsely-populated region is whiter, more rural and poorer than the rest of the state — and residents are more conservative. While California has become the center of the resistance to Trump, a number of Northern Californians are waging a resistance of their own: against California itself. Source 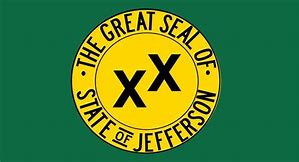