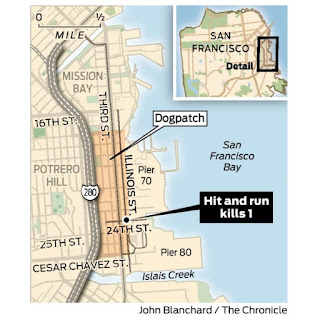 One Pedestrian Died in SF in Hit-and-Run; Four Other Injured

One person has died after a driver reportedly swung an ax at a group of people people and ran over them in San Francisco. At least five people were injured in a vehicular hit-and-run in San Francisco's Dogpatch neighborhood, near the intersection of Illinois and 24th Street, according to San Francisco police. The driver fled the scene but was later seen taken into police custody near Alamany Blvd. and Cayuga Ave. Four of the five victims were in "life threatening condition," according to SFPD, and one later died after being transported to a nearby hospital. The incident occured around 10:24 a.m., police said. One witness said a driver in a white GMC van had an argument with a man on the sidewalk and a few other people intervened. The witness said the driver got out of his vehicle and had an ax. A second witness also said the driver posessed a small ax and that the people involved in the argument chased the driver back into the van. That's when the driver drove into the people on the sidewalk. Police said they don't know the relationship between the injured and the suspect, and they do not believe there is a threat to the public at this time. Source