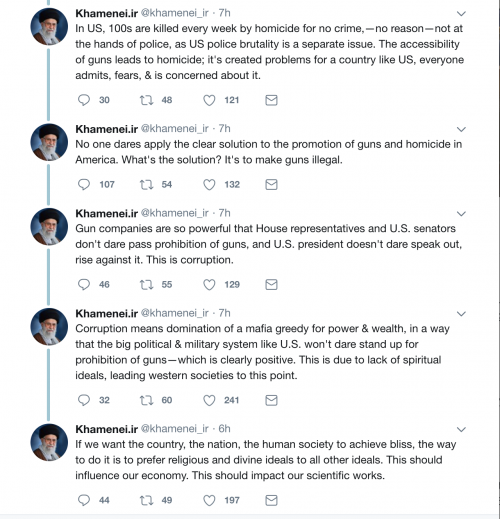 Iranian Supreme Leader Ayatollah Ali Khamenei is calling on America to "make guns illegal" in light of deadly shootings that have taken place across the United States, according to comments made by the Iranian leader over the week. Khamenei, who has instructed his government to spend billions of dollars on military hardware and ballistic missiles, lashed out at the United States over the weekend, calling on America to ban all guns in light of a series of domestic shootings."No one dares apply the clear solution to the promotion of guns and homicide in America. What's the solution? It's to make guns illegal," Khamenei wrote on Twitter. In a sweeping thread that touched on gun violence and the homicide rate in America, Khamenei criticized the U.S. "gun lobby" and called on America to ban weapons. Source