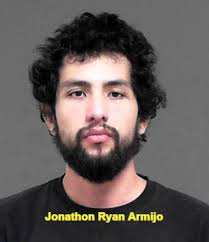 Man severely injured by exploding package, suspect in custody
LAS ANIMAS COUNTY, Colo. — The man arrested and accused of planting a package that exploded when another man picked it up was previously arrested in connection with booby traps that were rigged to kill or injure animals, an arrest affidavit from the Trinidad Police Department (TPD) says.
Diego Hurtado, 22, was severely injured when he picked up the package in a parking lot in the 300 block of East North Avenue around 1 a.m. on Feb. 8, according to police.
Jonathon Ryan Armijo was taken into custody in connection with that incident and another incident that happened on Feb. 5 in a different Walmart parking lot. He's being held in the Las Animas County Jail on the following charges:
Two counts of attempted first-degree murder
Two counts of possession/use of an explosive device
Officers who responded to the Feb. 8 incident said they made contact with the victim and another man who was with Hurtado. That man told officers that they were walking through a parking lot and spotted a package, which was described in the arrest affidavit as a wooden box.
The box had a note attached which, according to the affidavit, read, "Sissy Mom + Dad's rings! DO NOT LOSE! See you at the wedding!"
The witness said Hurtado picked up the package and walked with it and then opened it near the apartment complex office. When he opened it there was an explosion, according to TPD. Hurtado suffered severe injuries which included the loss of most of the fingers on his left hand. He also has a severe facial injury and a puncture wound to his chest, the affidavit says.  Source
at February 09, 2021