SALEM, Ore. (AP) — Concern is growing in a conservative, remote corner of Oregon as people start arriving in a national forest for a Rainbow Family of Living Light annual gathering, a counter-culture get-together expected to draw thousands. Officials with the Malheur National Forest said this week that around 600 Rainbow Family members are already camped at a gathering site near Flagtail Meadow and that between 10,000 and 30,000 are likely arriving by July 4, when the multi-day event peaks with a prayer for world peace. People with small children, those with disabilities and senior citizens were among those who wrote to the event's Facebook page, discussing the site near the town of John Day in eastern Oregon, accessibility and bus routes. Some commentators expressed concern about keeping the place hygienic. "Bury your s--t, bury your dog's s--t, bury your baby's s--t," one person wrote. Another asked what the "pants policy" is, and got dozens of responses, including that they're optional. The U.S. Forest Service said that as of Tuesday, it had made two arrests, and handed out 31 warnings and three violation notices. The Forest Service said its resource specialists are making sure that kitchens, peace circles, and latrines are located appropriately. Ahead of last year's event in Vermont in the Green Mountain National Forest, there was a lot of concern about whether the Rainbows would pick up after themselves once the gathering was over. They carved campsites out of the wilderness, but once the bulk of the Rainbows left, a number stay behind, in some cases for weeks, to clean up. Source 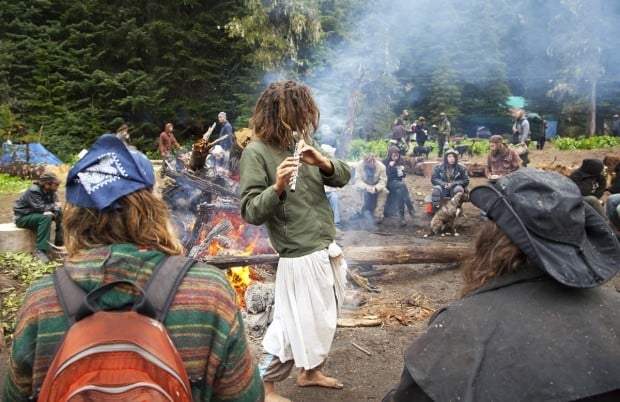