Washington Distributism In Action: Shirtless Distributist Shot Over A Raccoon 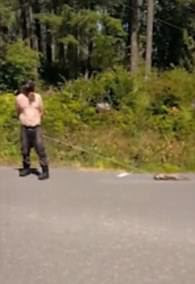 Raccoon rage! Man is shot and run over by enraged bystander who mistook the dead raccoon he was dragging down the road for a dog

A man was shot in the leg and then run over by an angry bystander on Sunday after the other man thought the dead raccoon the victim was dragging down the road was a dog. The victim, who lives in Mason County, Washington, was planning on using the dead raccoon as bait in his crab fishing pot, according to police. Surveillance video of the incident shows a man in a Ford truck with a dark colored canopy confronting the victim, who has not been named, as he dragged the dead animal, reported Q13 News. Daily Mail>>>>>>>