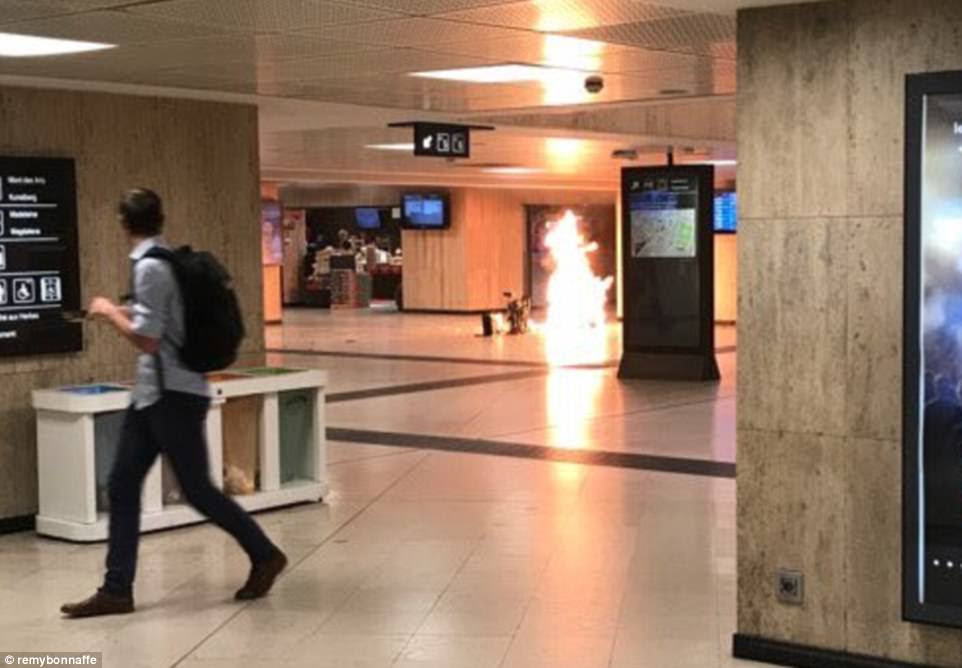 Fresh terror in Brussels: Suspected suicide bomber threatening train passengers 'shouts Allahu Akbar and triggers an explosion' at city's central station as he is gunned down by soldiers

A suspected suicide bomber who allegedly shouted 'Allahu Akbar' before triggering an explosion at Brussels Central Station has been gunned down and killed by soldiers. Shots rang out soon after 8pm tonight as police and soldiers moved in to 'neutralise' the man, who was said to be 'threatening rail passengers' in what is being considered as a terrorist incident. Initial reports suggested the suspect - described as being 'tanned, well-built and in his 30s' - was wearing an explosive vest or rucksack, while witnesses later claimed he tried to blow up a trolley or a suitcase. Terrified passengers inside the station ran towards the tracks as they tried to avoid the blast while tourists outside fled in panic. Within a few minutes the busy nearby shops and restaurants were shut down. A bomb squad performed a controlled explosion of a bomb belt the suspect had at the Central Station and evacuated the city's famed Grand Place square 650 feet away while checking to see if there more hazards. The suspect was shot by soldiers who were already patrolling the station when they swooped on the attacker, whose death is yet to be officially confirmed. There were no other casualties and police quickly said the situation was 'under control'. Daily Mail>>>>>>>