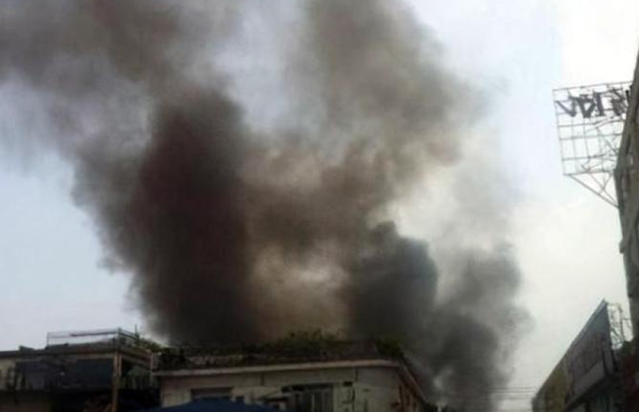 Farmer - land dispute. At lease that is what the Chinese government officials say.

Guangdong: Expropriated farmer blows himself up in government office
This is the first case of its kind years. The bomber, who died along with four other people, carried out the attack because of a dispute with the authorities over compensation. Between 2005 and 2015, local governments took land from millions of farmers. Judges cannot limit the power of local officials.
Guangzhou (AsiaNews) - A farmer set off a homemade explosive device at a government office in Mingjing, a village in Guangdong province, last Sunday. Five people, including the bomber, were killed, five wounded. The man allegedly was involved in a dispute with local authorities over compensation owed to him following land expropriation. The area in question is home to about 3,000 people, and was chosen last year for major property redevelopment. A Shanghai developer wants to recreate an old village to attract tourists. The eight-billion-yuan (US$ 1.2 billion) project involves some 270 acres of land (110 hectares), and the relocation of farmers. This is the first attack against a government office in several years over land use. In this case, the local village committee, which is responsible for land use, was the target. For decades, the authorities have seized land, evicting farmers, in order to encourage major urban development. Such actions are often illegal and the result of graft, sparking countless social protests. According to a study by the University of Hong Kong cited by RTHK, local governments took land from one to five million farmers per year over a ten-year period (2005-2015). In many cases this was done in violation of national land-use law with little or compensation. The best known incident occurred in 2011, when thousands of residents in the village of Wukan turned on local authorities, accusing them of selling their land to private groups without adequately compensating them. Protests ended only after Wang Yang, then provincial secretary of the Chinese Communist Party and now a member of the Politburo Standing Committee, made “political and economic” concessions. In order to limit abuses by local officials, the central government gave judges more independence on expropriation cases. However, observers note that the reform has had no effect since judges are too dependent on those who wield political power. Source
at March 24, 2021