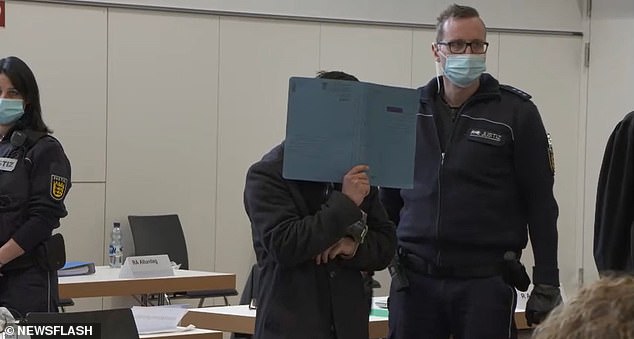 Four migrants who raped a 14-year-old girl at a refugee shelter on Halloween after plying her with alcohol are jailed in Germany
Four asylum seekers have been jailed in Germany for sexually assaulting a schoolgirl. All four defendants were found guilty of rape for the attack on the 14-year-old, which took place on Halloween in 2019. One defendant was also found guilty of grievous bodily harm. The Ulm Regional Court sentenced the two men and two boys on Monday for raping the 14-year-old girl after plying her with alcohol and persuading her to return with them to their shelter. A 28-year-old was given two years and three months in prison without parole for rape, while a 26-year-old received the same sentence for aiding and abetting rape, grievous bodily harm and giving illicit drugs to a minor. Two 17-year-old received youth sentences of two years and three months each, also without parole. One was found guilty of rape and grievous bodily harm and the other was found guilty of three counts of rape. The court heard how the four defendants drugged the girl and raped her several times in the refugee shelter in the town of Illerkirchberg in Alb-Donau in the German state of Baden-Wurttemberg. They had previously given alcohol to the girl and persuaded her to join them in their accommodation, evidence showed. The day after the attack, the girl told her parents and went to the police. The defendants, who are from Iraq and Afghanistan, remained silent in court but two partially admitted their guilt towards the end of the trial. According to t-online.de, there were five defendants at the start of the trial, including a 15-year-old Iranian boy who knew the girl prior to the attack. Source