Another gun death at the FSSP.

Officer slain in Boulder shooting was a TLM parishioner.
Recently there was a terrible mass shooting in Boulder, CO perpetrated by a adherent of the Religion of Peace. One of the victims was a Boulder Police Officer, Eric Talley, 11 year vet, 51 years old, husband, father of 7. He responded to the incident and he was killed. Officer Talley and family belong to Our Lady of Mount Carmel in Littleton, staffed by priests of the FSSP, including my friend Fr. Jackson, author of the fine book Nothing Superfluous. The family attended the Traditional Latin Mass there. Source 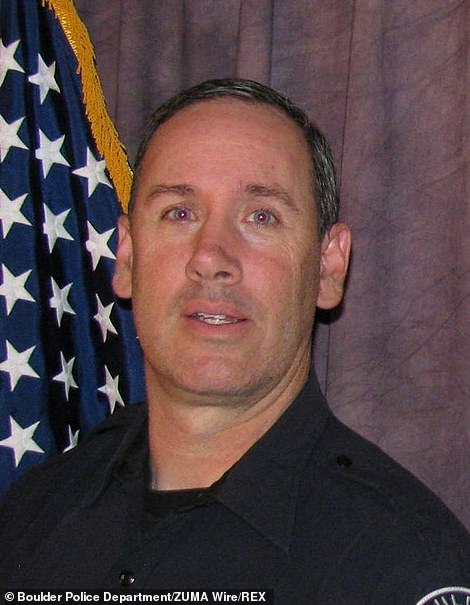 Officer Eric Talley
Parishioner At FSSP Our Lady of Mount Carmel, Littleton, CO
Salute to a police hero: Hundreds line the streets of Boulder holding Blue Lives Matter flags along with cops and paramedics to honor slain Officer Eric Talley who was killed during a supermarket massacre along with nine others
Hundreds of residents gathered along a procession route on Wednesday for slain hero, Eric Talley, as Boulder police, paramedics and firefighters honored the officer just two days after he was shot dead by a gunman who opened fire at a supermarket, killing nine others. Talley, 51, was the first officer to arrive to the scene of the King Soopers supermarket just before 3pm Monday afternoon. He was killed while trying to help shoppers and employees escape a gunman inside.Nine other men and women were killed by suspected gunman, Ahmad Alissa, 21, who now faces 10 counts of murder. In honor of Talley, an 11-year veteran with the Boulder police force, officers from the Boulder Police Department, paramedics and local firefighters held a procession on Wednesday. Law enforcement vehicles were seen escorting Talley's body from the coroner's office to a funeral home in Boulder as hundreds of local residents turned out to salute the officer. Some were seen creating hearts with their hands as the vehicle carrying Talley's body passed by. Others were seen waving Blue Lives Matter and American flags. Makeshift memorials of flowers, votive candles and condolence messages sprang up this week outside the supermarket and at police headquarters. Source
Two other guns deaths at FSSP:
Posted by dxv515 February 02, 2020PRIESTLY FRATERNITY OF SAINT PETER (FSSP) GUN CULTURE KILLS ANOTHER PRIEST: GUN ENTHUSIAST FR. EVAN HARKINS BLOWS HIS BRAINS OUT.....
Something is going on at FSSP.
Celebrated gun nut Ann Barnhardt who straps several firearms to her person while she attended Latin Mass at Our Lady of Mount Carmel in Littleton