Her aunt, is Kamala Harris, the Vice President of the United States.
Kamala Harris' controversial niece Meena deletes tweet assuming Boulder gunman was white because he was 'taken into custody alive'

Vice President Kamala Harris' niece has deleted a tweet after facing backlash for assuming the Boulder grocery store gunman was white because he was taken into custody alive. Meena Harris deleted her tweet on Tuesday after police revealed 21-year-old gunman Ahmad Al Aliwi Alissa, who is accused of shooting dead 10 people a day earlier, is of Syrian descendant. 'The Atlanta shooting was not even a week ago. Violent white men are the greatest terrorist threat to our country,' the 36-year-old tweeted in the hours after the massacre. Meena, who is a mother-of-two, lawyer and children's book author, then revealed she had deleted that tweet. Source 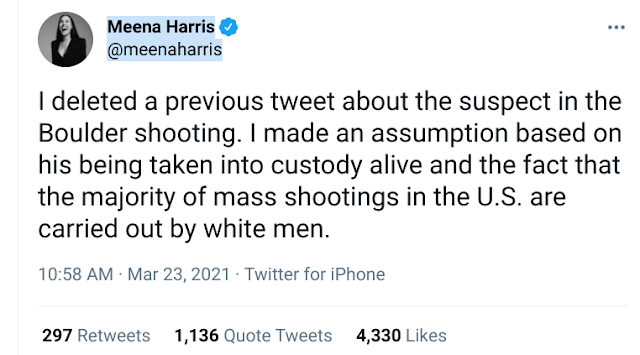